On Tuesday night (July 5), Alton Sterling was gunned down by police officers after law enforcement officials responded to a disturbance call outside a Triple S Food Mart in Baton Rouge, La.

The video of the 37-year-old’s unjustifiable passing surfaced across the web and sparked outrage in yet another black life taken away senselessly. Social media users later expressed their disdain with police officers’ relationship within black and brown communities and the subject of the right to bear arms.

It’s just so hard to still be expected to go to work and function like a normal human being amongst people who couldn’t care less.

RIP #AltonSterling too disturbing to accept. Taking life away like it’s not something we all equally deserve! God protect us all! — Big Sean (@BigSean) July 7, 2016

#AltonSterling and #PhilandoCastile both had licensed fire arms but, they deserved to die because of it? So all of a sudden we’re anti-guns?

In both these videos #PhilandoCastile and #AltonSterling the police officers are heard saying fuck repeatedly. They knew they were wrong. — Kiana (@BooYaKaH_K) July 7, 2016

Drake also took to his social media platform to share his thoughts on the ongoing matter, writing that he’s concerned “for the safety of my family, my friends, and any human being that could fall victim to this pattern.” He previously stated that he viewed the chilling video of Sterling’s murder which left him empty after its conclusion.

Hillary Clinton On Alton Sterling Shooting: ‘Something Is Profoundly Wrong’

“It’s impossible to ignore that the relationship between black and brown communities and law enforcement remains as strained as it was decades ago,” the “Take Care” artist writes. “No one begins their life as a hashtag. Yet the trend of being reduced to one continues.”

An investigation into Sterling’s death has been launched by the FBI. 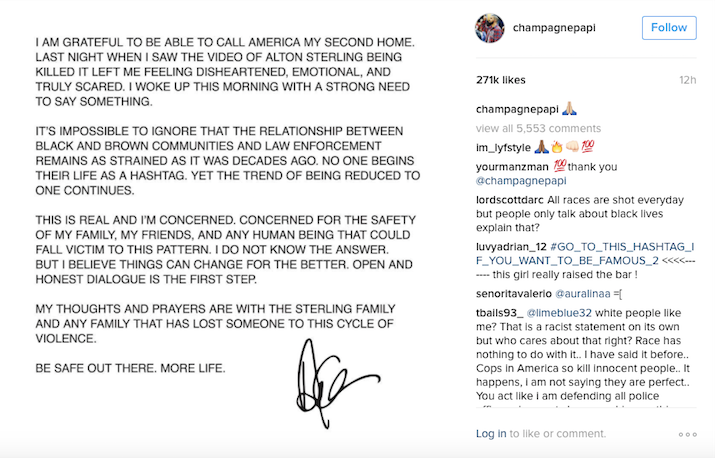