Fetty Wap’s ongoing drama with his brand new baby’s mother, Love & Hip-Hop star Masika Kalysha, continues. The rapper and reality star exchanged words on Twitter on Monday (Jan. 18) as a dispute began about the terms of their romp that left her with child. The two exchanged insults, as Masika claimed Fetty was being less than truthful during his interview with The Shade Room during which he confessed to fathering her child.

“Basically, she knew what she was doing,” he told the popular gossip site. “I wasn’t just no random dude in the club, you know what I’m saying? She knew I was going to be there, and that’s how that happened.”

Masika and Fetty also differ on the depth of their fling, with the rapper claiming that the reality star wanted to “jump out planes and s**t,” and Masika stating they did skydiving and “other s**t.” Fetty also claimed that on the night their child was conceived, Masika never inquired about using protection. In the Shade Room interview, Fetty also claimed they had a plan to prevent having a child together.

“We talked about certain sh*t that was supposed to happen and I guess she went around it,” he said. “That’s how I knew it was all planned out. This sh*t wasn’t no we supposed to be together. I was out. Once I left, I went right back to my regular life.” 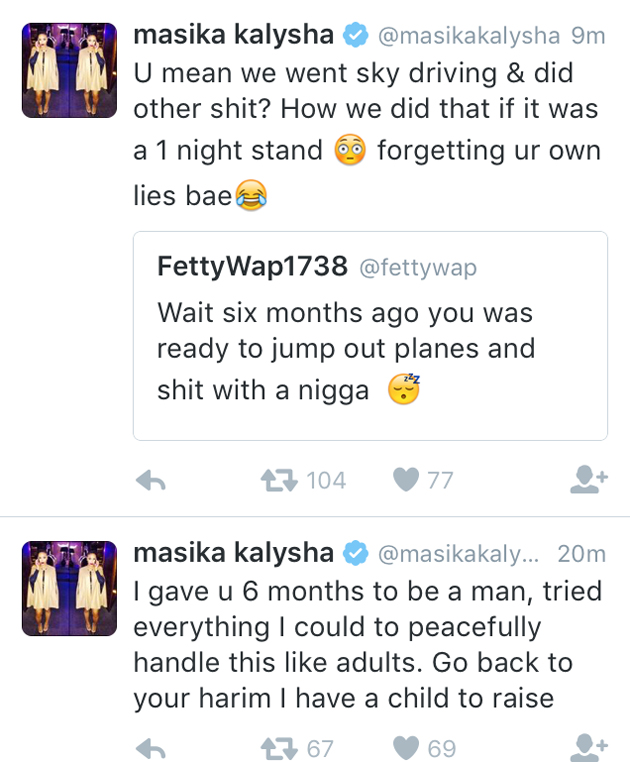