Jazmine Sullivan has been leading the charge of women embracing the parts of themselves that society tries to shame and dismiss. After the release of her dialogue-sparking Heaux Tales EP, the R&B vocalist continued the conversation on social media with an IGTV series touching on topics from pillow talk to dating to daddy issues. The singer took it a step further when she invited fans to share “heaux tales” of their own.

Roughly ten weeks ago, Sullivan sparked the hilarious confessional series titled “Heaux Hive [Volume] One.” To kick things off, she asked fans, “So what’s the craziest thing you’ve ever done for someone with great sex?” Followers admitted to “babysitting their newborn,” taking “money out of their 401K to pay rent.” and “sleeping in his car while he slept inside with his girlfriend.” The anonymous stories were utterly hilarious and downright outrageous.

After an apparent five-week hiatus, Sullivan returned on Tuesday (Aug. 30) with the prompt, “Tell me a secret you’ll never tell your partner,” and as she put it, she simply “starts [the] fire and walks away.” Fans took the opportunity to run wild and most shockingly confess that they’re lusting after their partner’s fathers. *(Alexa, play “Hey Daddy (Daddy’s Home)” by Usher)*

Sullivan’s expert meme/GIF usage is also top tier and only fuels the flame from their outrageous responses. Here are a few of our favorite secrets including one where Sullivan threw comical shade at Trick Daddy and referenced Joseline’s Cabaret. 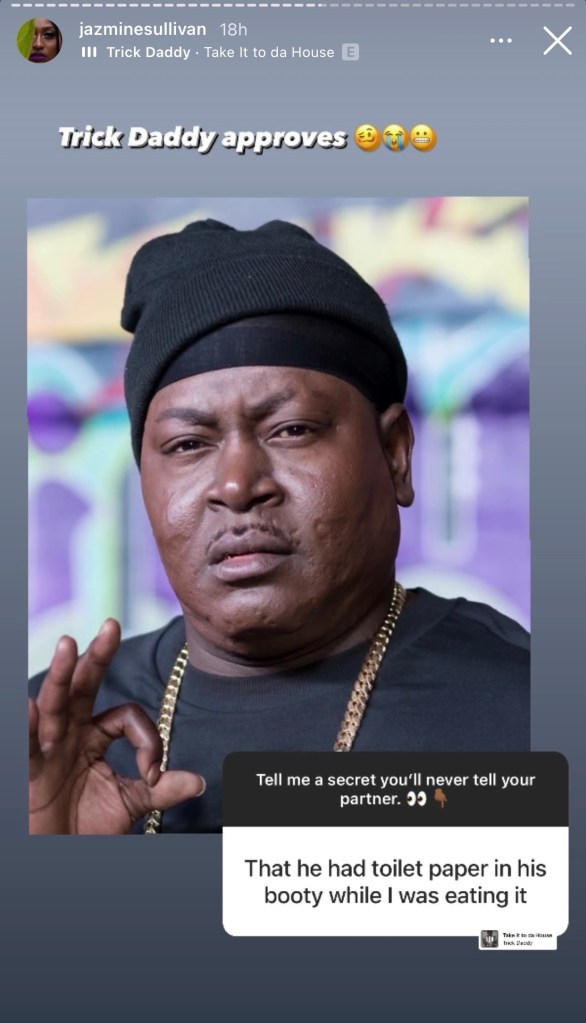 The “Pick Up Your Feelings” singer doesn’t just spill other people’s tea. Her confessional series also tackles daddy issues, self-love, dating, and unlearning. All of the highlights can be found on Sullivan’s Instagram page.

On the music front, watch her Sound Bites by Grubhub performance below where she sang a number of her singles, from “Bust Your Windows,” to “Girl Like Me,” to her debut song, “Need U Bad.”