Following in the footsteps of only 10 predecessors, Mary J. Blige became the 11th recipient of the Icon Award, presented at the 2022 Billboard Music Awards. Bestowed by the 2018 honoree, Janet Jackson, both music legends received standing ovations and an overwhelming response from the crowd when they took the stage.

As poised as ever, Jackson walked out praising the Queen of Hip-Hop Soul’s immeasurable accomplishments, pioneering fashion moments, and upward momentum over the past 30 years.

“Mary J. Blige represents truth. Her work has always given us comfort because she sings me, she sings you,” Jackson gleefully gushed during her opening remarks. As a nod to Blige’s timeless hits, Jackson continued, “I reminisce, but I’m not gon’ cry ’cause even though sometimes it feels like every day it rains, I got no more drama. I’m just fine with my life, my life, my life, my life in the sunshine. Mary has made a commitment to her fans to always be her authentic self. Now, that’s real love.”

Queen Latifah, Missy Elliott, H.E.R., and Kiana Ledé all congratulated Blige in a taped montage before she took the stage to accept her award. 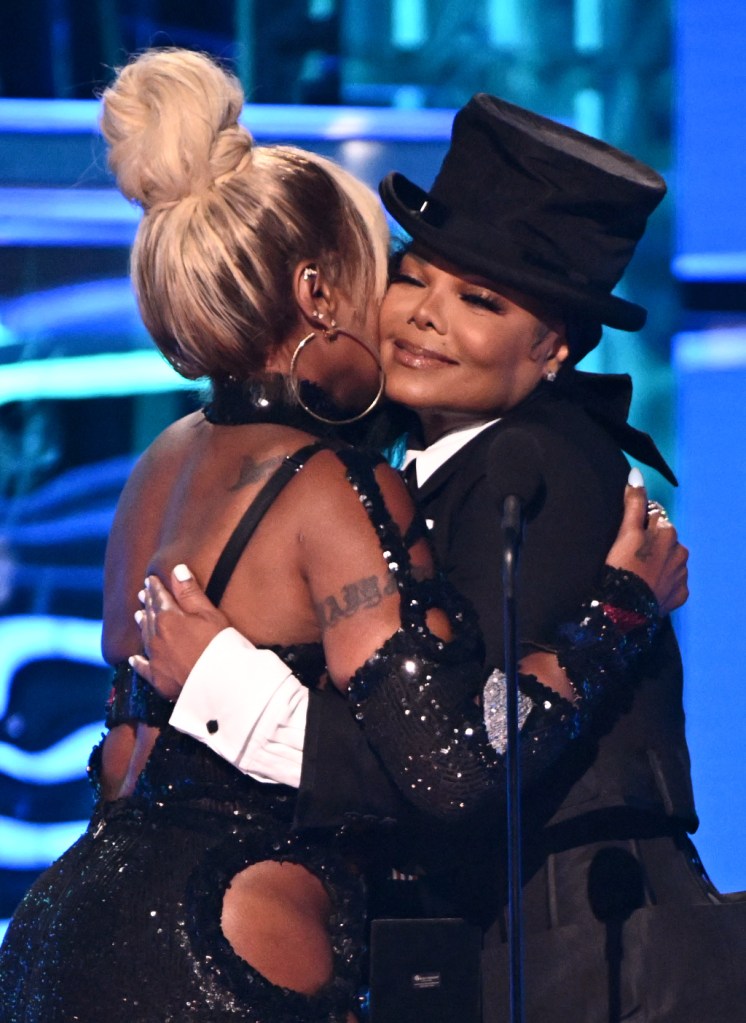 As BBMA host, Diddy aided Blige to the stage with her 2007 jam, “Just Fine” playing in the background, Blige beamed from ear to ear. “The way the world is now, I think people think icons are born that way,” she began. “They become a legend overnight. But that is definitely not the case. It takes a lot of time, hard work, and a lot of surviving trial and error to achieve greatness. What an icon means to me is overcoming obstacles to accomplish the unthinkable and be wildly admired for having influence over a multitude of people. And that is what I always represented.”

The Good Morning Gorgeous songbird spoke to her influence on not only music and turning her pain into a success story, but also her impact on mainstream fashion. “Every inner-city girl was recognizing their own and could relate to everything I was saying and every female artist that came into the game wanted to do everything I was doing and still does to this day. I was ghetto fabulous, and I still am!” declared Blige. “So ghetto, so fabulous, and people were threatened by that. And now everybody wanna be ghetto fabulous.”

Before thanking a long list of friends, family, and supporters, the Grammy-winning, 11-time BBMA-winning singer gave the most mic-drop-worthy line of the night. “The message of my music has always been we are not alone in our struggles and I’m not alone now. For so long, I was searching for a real love and I finally found my real love, and that real love is me.”

The Icon Award celebrates those who have made an indelible mark on music and have achieved massive success on the Billboard Charts. The honor comes just one week after Mary’s Strength Of A Woman Festival took over Atlanta during Mother’s Day weekend 2022.

Watch the iconic moments in full below.

From one Icon to another, @JanetJackson is here to present the #BBMAs Icon Award to @maryjblige ✨ #IconMJB pic.twitter.com/UnkJ6jzguZ