Nipsey Hussle had big plans for a particular Kendrick Lamar feature on his forthcoming Victory Lap album. Little did he know, his team and K. Dot had their own vision for what would become the latest release from his new project.

“Truthfully bro, you know I sent him a record that’s on the album also, called “Keys 2 The City 2.” My original concept was just based on us both coming out of L.A. County, him being from Compton and me being Crenshaw and Slauson, and I thought the concept of “Keys 2 the City 2” really hit a bull’s eye for Kendrick,” Nipsey tells Zane Lowe of Beats 1.

“One of my producers, by the name of Axel Foley, he works with Kendrick real closely. He did “The Heart Part 4,” and he just snuck the record to Kendrick,” he continues. “I told my whole team send “Keys” [because] I thought he should be on that one, and they just didn’t listen and they sent “Dedication.” I saw Kendrick at the Tupac movie premiere as he was parking and I just hopped out like “what’s up bro?” and you know shook his hand. He’s like “yeah, expect the record back pretty soon, I laid something to it.” I’m like “alright, bet. The “Keys 2 The City 2” record? He’s like no, “Dedication.”

Jay-Z To Perform Alongside DJ Khaled At 2023 Grammy Awards

Despite what he wanted himself, Neighborhood Nip had enough confidence in his team to recognize that team work definitely makes the dream work.

“I’m like damn I ain’t even send that,” Nipsey says about his new Kendrick collaboration. “But he sent it back and when I heard the verse I was really inspired. I felt like he killed it. He talked about something that happened the night of the ‘Pac premiere. If you really listen to his verse, he’s talking about me, Snoop Dogg, Top Dawg, and himself. We really had a convo. We had a conversation about just L.A. streets and about how the time might be right right now for us to really try to use our influence to evolve how we exist. From Bloods and Crips, just the tribalism that’s going on out there. We were just wondering, we just had an honest convo like what y’all think? Is it time for us to really start that narrative of and he speaks about that in his verse.”

Listen to “Dedication” below, along with Nip’s Beats 1 interviews.

Victory Lap is set to be released worldwide on Friday (Feb 16). 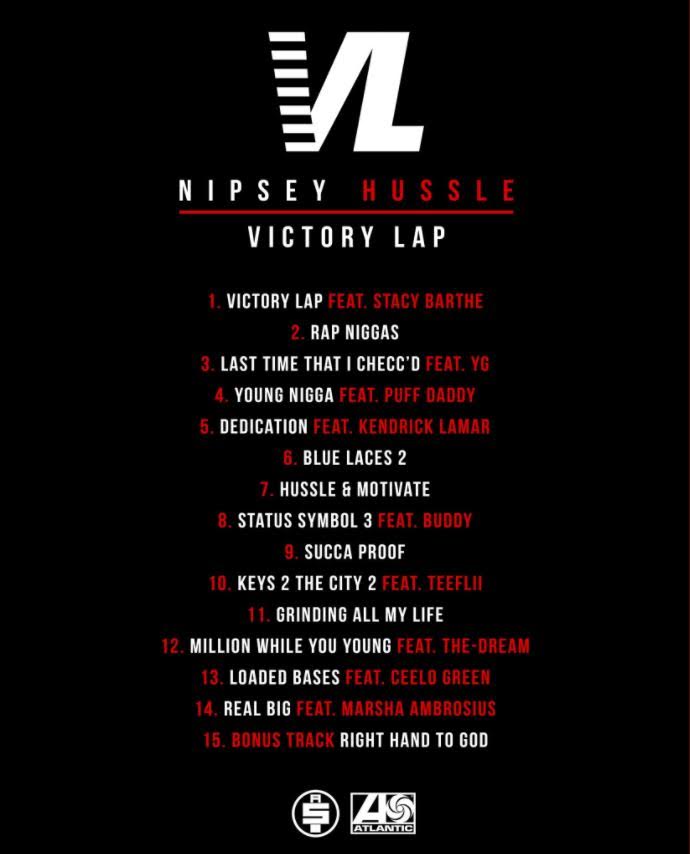