Rico Nasty has been targeted by Playboi Carti fans as one of the opening acts on his King Vamp Tour. Viral videos have highlighted an overly amped crowd booing the “Sandy” rapper, even throwing an object at her while she was onstage. On Saturday (Nov. 27) in a series of now-deleted tweets, the 24-year-old shared how the negative behavior from concertgoers has impacted her mentally, causing what should be a career highlight to be a low point in her life.

“I dead a*s need at least two hours out of each day. To just cry,” Rico tweeted.

“Crazy how I wanted a tour bus my whole life and now I just be on the tour bus crying myself to sleep every night,” she revealed in another post.

In the most heartbreaking tweet, Nasty shared “I wish I was dead just as much as y’all do trust me.” She continued. “Y’all win.” 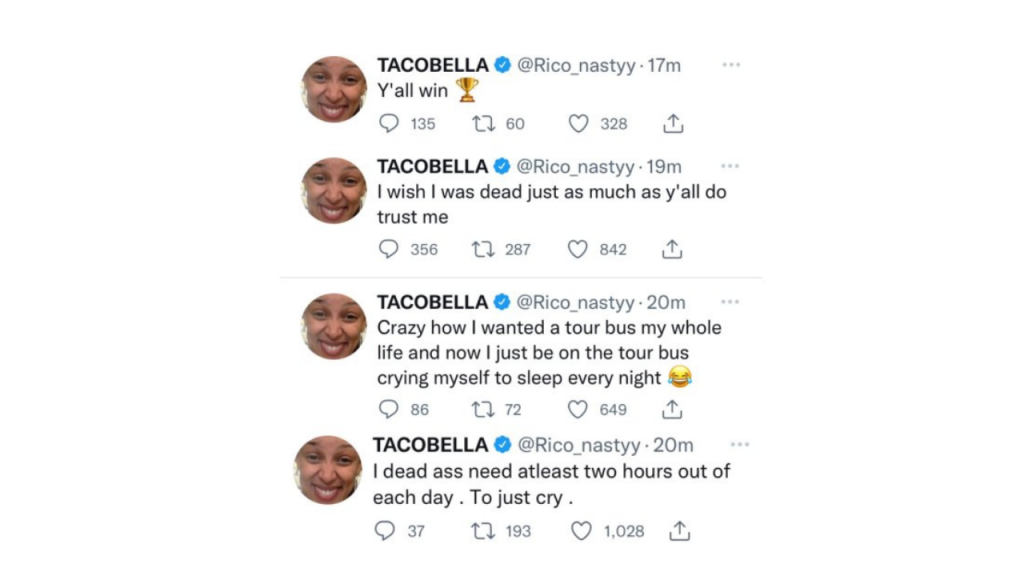 Several of Rico Nasty’s peers and collaborators offered comforting words and defended her against the bullying. Megan Thee Stallion shared a positive message for “Key Lime OG” artist the next morning.

i love u forever friend ? @Rico_nastyy

For some, it didn’t take Rico Nasty’s devastating tweets to convince them to speak up against the heckling. On Nov. 14, a Hip-Hop Twitter page shared video footage of a person throwing an object at Nasty while she performed during the Portland stop of the King Vamp Tour, accompanied by the laughing emoji. JT of City Girls quoted the tweet reminding followers there was nothing humorous about the situation.

“I want them to stop disrespecting her that sh*t not cool!,” she wrote. “Or nothing to laugh about!!!!!!”

Despite vocal support from some, Playboi Carti himself has remained silent, refusing say anything publicly about the way his opening act has been treated by his fans on his tour. Save for a hug the two rappers share onstage during a recent stop, public support from Carti throughout Rico’s struggles has been virtually nonexistent. The King Vamp Tour ends with a December 23 show in Carti’s hometown of Atlanta, GA.