Andrea Martin—the Grammy Award-winning songwriter behind hits like Toni Braxton’s “I Love Me Some Him,” SWV’s “You’re The One,” Monica’s “Before You Walk Out My Life,” Angie Stone’s “Wish I Didn’t Miss You,” and En Vogue’s “Don’t Let Go (Love)”—has died at the age of 49. Her cause of death is unknown.

The news came from Martin’s official Instagram page on Monday (Sept. 27). The statement read, “Dear Family and Friends, It is with a heavy heart we inform you of the passing of our beautiful Andrea Martin also know as ‘Annie.’ Andrea will always be remembered for her passion and dedication to her family and friends. Her impact will continue to be felt and heard for a lifetime […] Forever a legend.” 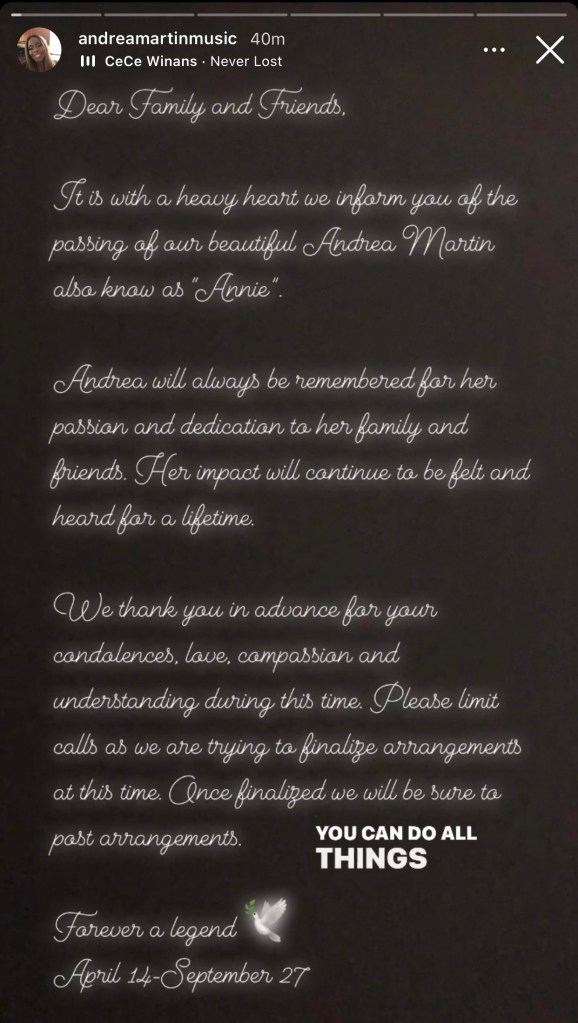 Martin also co-wrote several songs with longtime writing partner, Ivan Matias, whom she met at Fiorello H. LaGuardia High School of Music & Art and Performing Arts. In 1998, the Brooklyn native released her album, The Best Of Me. Her single, “Share The Love” peaked No. 4 on the Billboard dance charts in 1999.

Earlier this month, fans discovered that Martin was the true voice behind Robin S.’ 1993 hit single, “Show Me Love.” She sang on the demo and producers of the song released her version instead of Robin’s. Martin spoke on that moment on an ASCAP panel and considered it a learning experience in her career.

Martin also wrote several songs for Melanie Fiona including “It Kills Me,” “Gone And Never Coming Back,” and “Give It To Me Right.” The Canadian singer honored her in an Instagram post writing, “I am shattered over this. I don’t think I’ll ever find the words or write the song to express how much you mean to me. You took me under your wing and were infinitely generous with your time and your talents. Every session, car ride, visit and phone call was filled with laughter and wisdom.”

Fiona considered Martin her “musical collaborative soul mate.” She continued, “…thank you for pouring into me the way you did. You made me better than I knew I could be. I will miss you forever. You are 1 of 1. Truly one of the best to ever do it. A gift to this world. Music won’t ever be the same without you. All the flowers for you. I love you.”

Matias also honored his friend on social media and considered their connection a “divine union.”

VIBE extends our sincerest condolences to the friends and family of Andrea Martin during this time.