The Lox joined the radio show The Breakfast Club on Wednesday (Aug. 11) and shared more on their now-legendary Verzuz battle against Dipset.

At Madison Square Garden, in front of a sold-out audience that included the likes of Fat Joe, Fabolous, and Carmelo Anthony, Jadakiss, Sheek Louch, and Styles P put on an iconic performance against their opponents that included trash talk, sharp vocal delivery, and group chemistry that was obvious to all.

The veteran rappers discussed how their long-running careers prepared them for battle. The Yonkers-bred crew, who performed completely live, taunted the Harlemites throughout the event for rapping over their vocals until Cam’ron, Juelz Santana, and Jim Jones switched to instrumentals only.

“TV tracks used to just have the hypes here and there. Now it’s the whole verse. A lot of artists don’t know, and it’s not to shoot ’em down. If you got a craft and a skill, you’re supposed to rehearse at it and know it, and you and the audience will feel better when you get that energy out,” explained Styles P.

Jadakiss added, “One thing about when you’re trying to rhyme over the song being played, you’re distorting the listener’s ears. It sounds like noise after a while.” 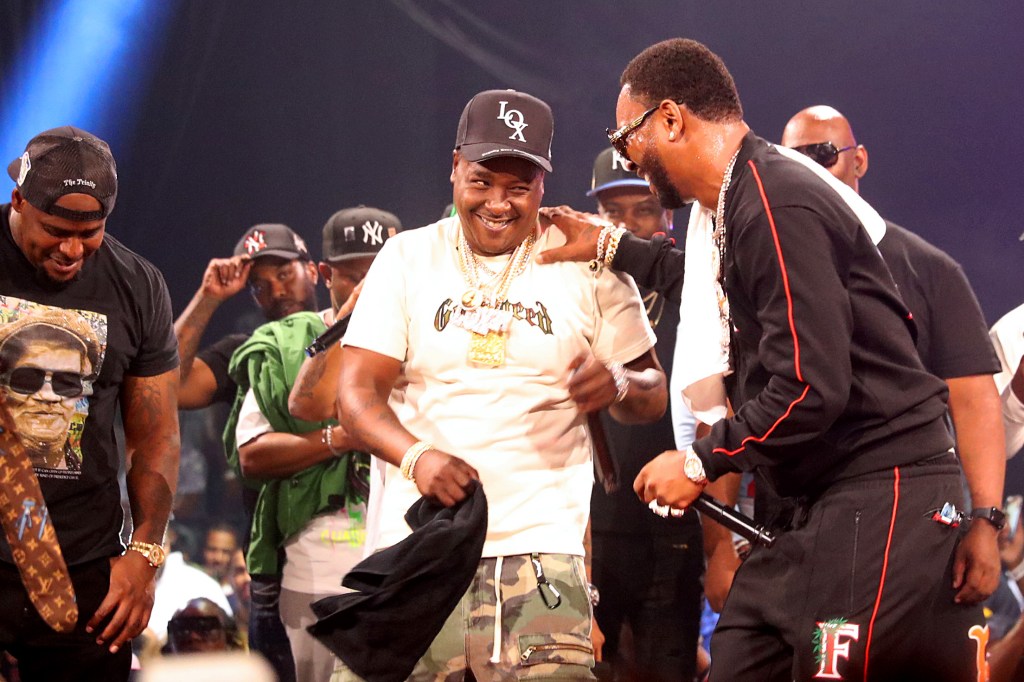 Johnny Nunez/WireImageWith decades in the game and entering another moment of high-visibility following the Verzuz showdown and an upcoming tour, The Lox also shared a message for other artists who may be on the downside of a roller-coaster career.

“That’s from staying on the Ferris wheel since Bad Boy,” started Styles. “This is what being on that hamster wheel and that Ferris wheel is about. You ain’t gon always be the hottest, you ain’t gon always be on top, but if you stick to your skills, your craft, love your brotherhood, love what you stand for, you will always find a way to survive. Somebody always gon’ call you, you’ll always get a big song here and there, you’ll always get a big check here and there. It just makes sense…it’s a culture thing. Every time you go back, any of our interviews we ever did with y’all, we always tell y’all we respect our peers, the younger, the older. We respect the craft.”

The rappers also discussed various elements of hip-hop, including the flashy style of not only members of Dipset (namely Jim Jones who Style’s P called “corny” for his chain display during Verzuz), but the culture in general.

“We got all of that Dior, we got everything. Performing you don’t want to be layered up,” explained Jadakiss. “You want to have gear, attire you can get busy in.”

“This is hip-hop, you know what I’m saying?” added Styles P. “I wanted to keep it in our field and in our corner and people understanding…I rock with new hip-hop and how it goes. I rock with braggadocious. As Kiss said, we do a lot of fly things. We got a lot of fly things. The main part is, I don’t have to be flyer than you to be dope. I just want to be better than you at rhyming. I want to rhyme fight, be better than you and the people say I’m doper than you. Hip-hop is a poor people’s thing. Besides the artist, think about the whole world. Who really upholds us and pushes us up? It’s poor people. I kept that in mind too. It’s some dude who can’t afford the chain saying it’s corny. Fortunately, I can but I’ma speak for that guy.”

Watching the Verzuz battle led many to question how many new rappers will have the same fate as either Dipset or The Lox—able to garner a crowd, create timeless records, and keep their careers thriving through generations. When asked about New York artists specifically, Styles P, Jadakiss, and Sheek offered up and agreed on a few artists they believe have what it takes. They named Dave East, Griselda, Nino Man, Tony Moxberg, and their own children. They also gave props to Lil Baby, Rapsody, Kendrick Lamar, and J. Cole.

Styles P concluded, “I think hip-hop is in a healthy place.”

The Lox also discussed more about the Verzuz battle, their upcoming tour, and their endeavors outside of hip-hop in the nearly hour-long conversation. Watch the interview below: