I’ve been an Usher fan for as long as I can remember. My earliest memories of the Atlanta-bred crooner include his recurring role on Moesha, his leading role in Light It Up, and the first song that ever stole my heart, 1997’s “You Make Me Wanna.”  Fast forward nearly 25 years later, Usher still has that same baby face, but it’s now paired with the mental and physical makeup of a grown man and the career of an industry veteran.

As arguably the greatest R&B male solo artist of this generation, and one of the few acts with a Diamond-certified album, Usher has added another accomplishment to his resume—his Las Vegas residency sold out almost immediately when it was first announced in Sept. 2020. Initially, the residency was set to run for only 12 shows, beginning with eight shows in July and four final shows to close out 2021 and kick off 2022. Due to overwhelming demand, eight additional shows were later announced, with six dates added in Aug. 2021 and two more shows added on Dec. 23 and 24.

Knowing the last show on Jan. 1, 2022 would most likely be the one to top them all, VIBE set out to spend the first night of the new year with Ursher, baby as he wrapped his first Vegas residency.

While waiting for the show to begin, the diverse audience—ranging in both age and ethnicity—piled into the Colosseum at Caesars Palace. Judging by the couple sitting two rows in front of me who looked like castaways from Rock of Love, the woman who kept tumbling down the stairs in heels she couldn’t walk in, and the sea of sparkle-ridden outfits spread across the lower level, it was clear whatever was about to take place in Vegas was not going to stay there.

Though it began 45 minutes late, as soon as the lights dimmed, nothing else mattered. A montage of backstage video clips started to play on the jumbo screens as a young Usher narrated, “As a kid, I always just wanted to entertain. I wanted to show out. It’s what I felt like I was sent to this planet to do.” Walking through the aisle on the main level in a deep indigo sparkling ensemble, he kicked off the night with a remixed version of his 1997 single, “My Way.” 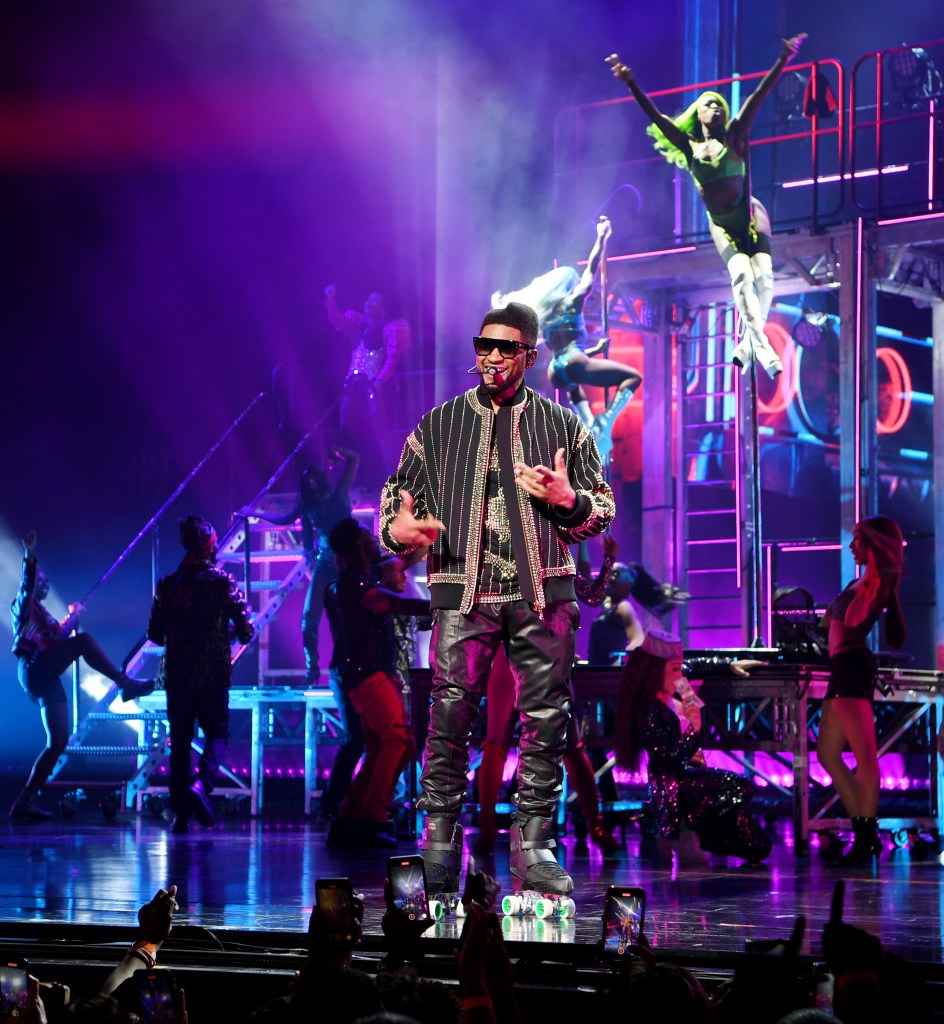 The eight-time Grammy-winner guided fans through his discography, gliding back and forth between his iconic run in the early 2000s, foundational elements from the ‘90s, and crossover classics from the 2010s. Transforming the stage into a jazzy juke joint, a skating rink, and a strip club, the 43-year-old got “caught up” under a hue of red lights, literally slid across the stage as fans sang the opening lines to “U Don’t Have To Call,” took off his jacket as his dancers grooved to a sultry breakdown of “Love In This Club,” and ignited a wave of slow twerking and body rolling when “Lovers & Friends” filled the room.

Throughout the concert, I noticed an unseen host sounded just like Lil Jon, as he shouted at one point, “Ayo Ush, let’s turn this thang into a partayyy!” Little did I know, it was Lil Jon; he made an onstage appearance toward the end of the show when he joined Usher for a dynamic performance of “Yeah” that practically mimicked the music video for the 2004 chart-topper. 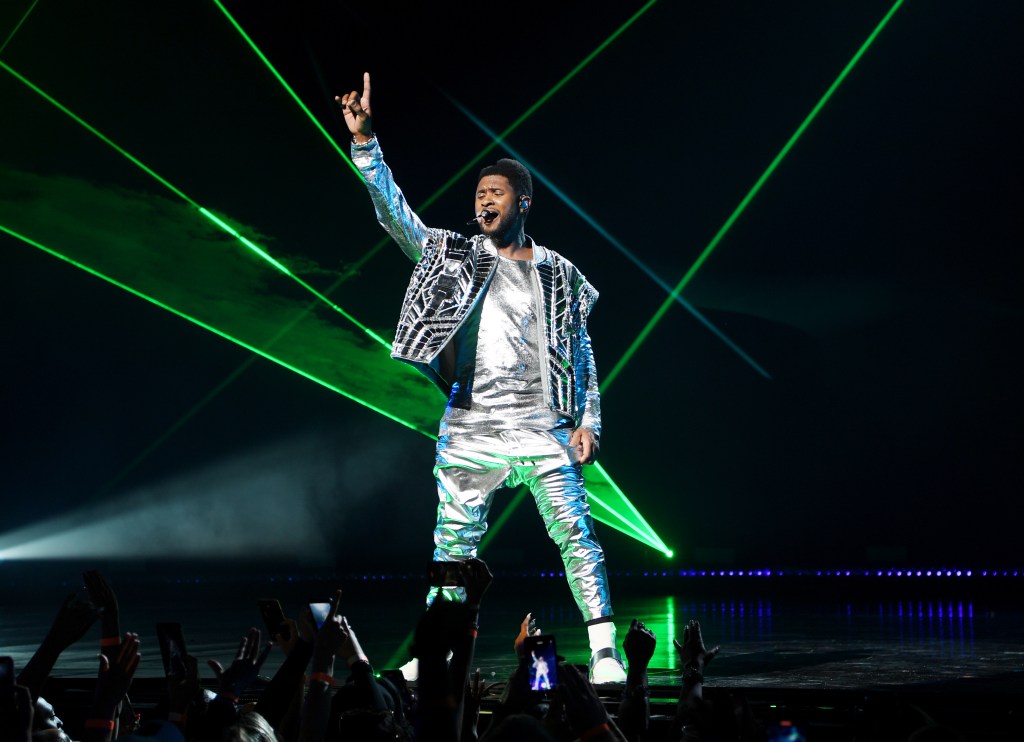 Usher promised more surprise guests throughout the two-hour, once-in-a-lifetime experience, and he exceeded expectations. Following a quick rendition of “Superstar,” he began to speak on classic R&B cuts he wished he had under his belt and “significant artists” who helped shape him into the performer he is today. With fans looking around wondering who he could be talking about, the crooner reflected on the beginning of his journey at around 8 or 9 years old. As he began to sing, “Now that you are here with me, baby, let’s do it right,” the opening lyrics to “Rock Wit’cha,” true fans immediately knew he was talking about the bad boy of R&B himself, Bobby Brown (it was Brown’s bodyguard who actually discovered Usher and started his career).

After the crowd settled down, Usher eased into a special rendition of The Deele’s “Two Occasions.” The 1988 slow jam was written by Babyface, and featured lead vocals from the famed producer-songwriter as well. As the audience was distracted singing along to the chorus, Babyface himself emerged from the darkness, strapped with his guitar as the song’s second verse began. My heart nearly exploded as I tried to both live in the magical moment and document it.

The 62-year-old spoke briefly on meeting Usher as a child before playing the chords to Boyz II Men’s “End Of The Road.” I damn near fell out when Wanya Morris joined the men as the entire room belted out the chorus to the Grammy-winning 1991 ballad.

Maintaining the slow jam mood, the show proceeded with the audience cooing to “There Goes My Baby” before rolling its way into a night at Cascade. Now rocking a decked-out, Atlanta-centric bomber jacket, leather joggers, an Atlanta Braves cap and his signature “U” chain, Usher—accompanied by Ashley Imani from the viral video below—swayed to his Ella Mai-assisted 2019 jam, “Don’t Waste My Time.” The production team appropriately wasted little time transitioning from Cascade to Magic City. With Ush-bucks flying, the crowd sang along to 2014’s “I Don’t Mind,” 2004’s “Bad Girl,” 2016’s “Good Kisser,” and 2015’s “Back To Sleep (Remix).”

One of my personal favorite moments of the night, though, was watching Usher recreate the “You Make Me Wanna” music video, before taking it back even further to 1997 as he seductively teased the crowd during “Nice & Slow.”

U-S-H-E-R-R-A-Y-M-O-N-D kept the crowd’s energy high as he moved into “Let It Burn” and “Confessions, Pt. II.” He also guided fans through an alternate galaxy—complete with laser beams, a Milky Way backdrop, and a futuristic metallic silver ensemble—as he got into his crossover pop hit, “OMG.”

Despite the curtain closing following the aforementioned performance of “Yeah,” there was a bit more Usher had left in him as he returned shimmering from head to toe in a silver three-piece suit singing “U Got It Bad.” The father of four began to shout out random fans’ outfits, commenting on his last look that he created just for the night, and dance for “no f**king reason.”

He closed out the night with his 2011 electronic single, “Without You,” sans David Guetta, starting with a slower R&B version before upping the tempo as he thanked his family, fans, and crew for the journey that was coming to an end. Confetti burst from everywhere, and that was a wrap, folks.

There wasn’t a better way to start this new year than with a night of classic slow jams and R&B legends. Though we’re sure he’s going to rest and spend some time with his young children, we can’t wait to see how Usher is going to follow this run.