Lil Nas X is quickly becoming one of the music industry’s most creative artists when it comes to his music videos. Since his genre-bending 2019 breakout hit “Old Town Road” featuring country crooner Billy Ray Cyrus, the 22-year-old pop star has made it his mission to tell stories through creative, risqué, statement-making visuals. He continues the trend with his latest offering “Industry Baby” featuring newcomer Jack Harlow.

Before the official video was released on Friday (July 23) at midnight, Lil Nas X dropped a prelude on Monday (July 19) where he was sentenced to prison. In the two-minute teaser, the singer finds himself on trial for the custom Nike shoes issued with the release of “MONTERO (Call Me By Your Name),” which stirred controversy for satanic themes in both the footwear and the video. In reality, the sportswear and athletic brand did take legal action against the Grammy-nominated artist.

According to CNBC, in April the two parties reached an agreement and Nike ended the lawsuit against MSCHF Product Studio, the company behind the custom kicks. The shoes were customized versions of Nike’s popular Air Max 97 sneakers with midsoles that claimed to contain a drop of human blood and cost more than $1,000 for one of the 666 pairs sold.

Although Lil Nas X was not named a direct defendant in the real-life case, his latest fictional short finds him in the criminal seat. Lil Nas X also plays the judge, defense attorney, prosecutor, and even a juror in a botched case where the issue on trial is the controversial shoes; however, he is judged, questioned, and subsequently sentenced for his sexuality.

With the official release of the full track, the music video picks up three months after the court case, with Lil Nas X now behind bars, plotting his escape. Enlisting the talents of fellow inmate Harlow, the two work together to break free from Montero State Prison. With choreography by Sean Bankhead, Lil Nas X and a troop of prisoners hit the showers for a high-paced, naked dance routine.

Sporting bright pink jumpsuits rather than the stereotypical orange, Lil Nas X provocatively dances throughout the video to the track’s bold lyrics. One security officer is shown enjoying the “MONTERO” video before being knocked out by the singer during the prison break.

“I don’t f**k bitches, I’m queer / But these ni**as bitches like Madea,” he declares at one point in the song produced by Take A Daytrip and Kanye West, whose highly anticipated album Donda is also expected to drop on Friday.

As for Harlow, a female guard joins him in his prison cell for a steamy makeout session and then lets the Louisville-bred artist out. In the end, the “What’s Poppin” rapper is shown driving a bus full of inmates out of the facility with Lil Nas X proudly sitting on top of the vehicle. 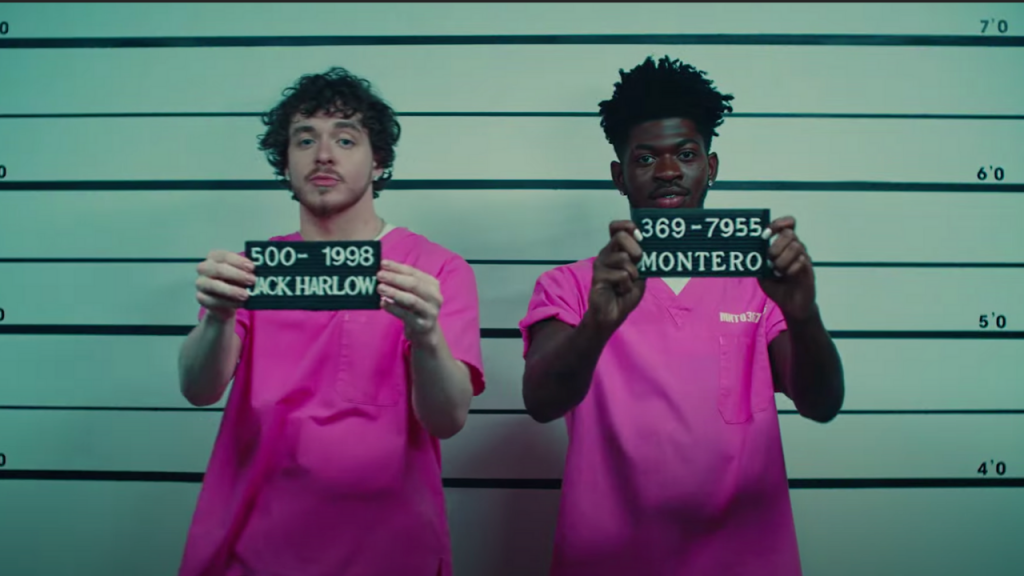 To coincide with the prison theme, Lil Nas X released the video as a fundraiser for The Bail Project, a national nonprofit organization on a mission to end cash bail. He launched the Bail X Fund, where people can donate to pay the bail of people behind bars across the country.

“Music is the way I fight for liberation. It’s my act of resistance,” he wrote in a statement issued on the campaign’s landing page. “But I also know that true freedom requires real change in how the criminal justice system works. Starting with cash bail. This isn’t just theoretical for me. It’s personal. I know the pain that incarceration brings to a family. And I know the disproportionate impact that cash bail has on Black Americans.”

In June, Lil Nas X announced his debut album MONTERO would be out soon, with a Marvel-inspired trailer. He also recently took the stage during the 2021 BET Awards with a performance of the polarizing song where he engaged in a center-stage kiss with a male dancer.