On August 26, 1996, Andre 3000 and Big Boi, known collectively as Outkast, released the album that would not only shift their musical careers but the sound of southern hip-hop thereafter. ATLiens helped bring the duo’s creative prowess mainstream and is heralded as one of the greatest albums of all time. Now, as the LP celebrates a 25-year legacy, the Georgia natives have issued a video for one of the throwback tracks and an intergalactic new video game.

The group premiered the official animated music video for “Two Dope Boyz (In A Cadillac)” on Thursday (Aug. 26). Directed by Rafatoon, the visual features cartoon versions of Andre 3000 and Big Boi taking their Cadillac through alternate settings, from rapping their verses on a stoop with a blaring boombox and dancing women to an imagined outer space with seductive aliens. 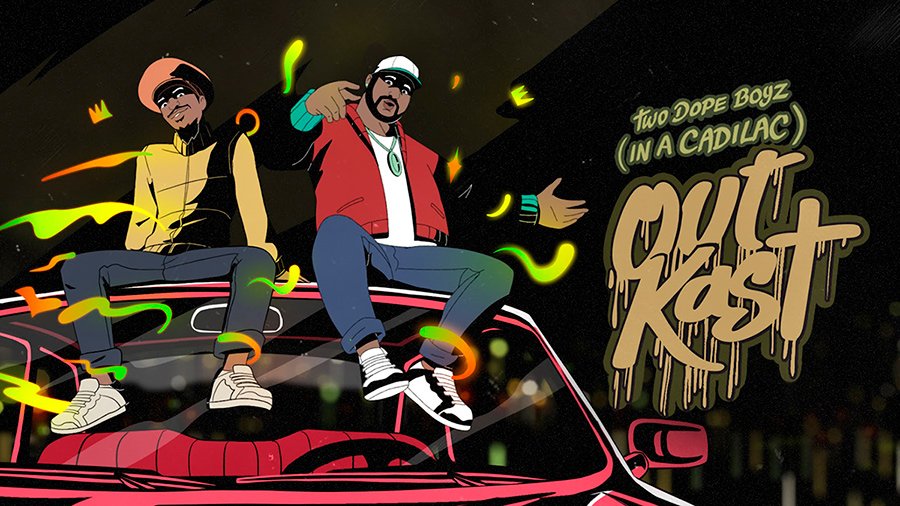 Legacy Recordings has also revealed the 25th anniversary of ATLiens comes with a reissue of the album both digitally and on vinyl. On Friday (Aug. 27), both versions of the 25th-anniversary deluxe edition will be released and feature 14 previously unreleased instrumental tracks, mixed in Hi-Res 24bit sound.

The album’s producers, Organized Noize, will also host a live stream event with all members of the group (Sleepy Brown, Rico Wade, and Ray Murray) as well as Brandon Butler of Butter.ATL and Dr. Joycelyn Wilson (Ph. D in Hip Hop and Urban studies) to discuss ATLiens’ creation and impact. The broadcast, set for Monday, Aug. 30, will be hosted on Instagram and Volume.com

Outkast fans can continue counting wins as the release also comes with newly uprezzed HD videos of key singles from the album as well, limited edition 25th anniversary merchandise, and more. There is also a new video game, created in a similar fashion to the “Two Dope Boyz” animated video. Produced by London-based digital agency F That, the ATLiens video game gives players the opportunity to operate as André 3000 and Big Boi in a battle against aliens in Atlanta.

Upon its initial drop, ATLiens Outkast’s second studio album debuted on the Billboard 200 chart at #2 and sold nearly 350,000 copies within two weeks of release. It has been certified double platinum by the RIAA, for shipments of two million copies in the United States, and is the home of the hit singles, “Elevators (Me & You)”, “ATLiens”, and “Jazzy Belle.”

The limited-edition 25th anniversary of ATLiens merchandise and music can be purchased here. Beyond vinyl records pressed by Legacy Recordings, Get on Down, or Vinyl Me, Please, the official store offers branded galaxy socks, ATLiens t-shirts, slide-on sandals, posters, tank-tops, and more. Prices range from $15 to $69.98, with the latter price listed for the album’s limited-edition four-LP vinyl set.

In June, Big Boi partnered with Airbnb and opened The Dungeon Family home as a vacation rental. The landmark was made available in celebration of Black Music Month and the ATLiens album anniversary.

“Atlanta is my home, and I grew up with The Dungeon Family in this house,” said Big Boi. “We would spend hours hanging out in the basement, writing rhymes and putting together beats at all hours of the night. Since purchasing the home, I’ve been excited to open its doors and welcome the next generation of artists to the space that inspired countless songs.”

Watch the “Two Dope Boyz (In A Cadillac)” video above: