Like all of us, Busta Rhymes is ready for Swizz Beatz and Timbaland to break out the archive of hits (and unheard gems) for their upcoming beat battle. In February, the rapper got to witness the now iconic clash between Swizz and Just Blaze, and even provided the web with a new meme to overflow the TL.

Jokes aside, the rap legend shared with VIBE his thoughts on the battle and how well received it was from admirers of hip-hop’s most important pastime. “It’s always incredible to see family push each other to be great,” he said before his performance at the Crystal Pepsi Throwback tour Tuesday (Aug. 1) in the Bronx. “When you’re respectfully competing, and it’s all in fun, it’s even more dope. As a fan and growing up [seeing] battle rap, graffiti, dance or DJing…. this is what the fundamentals of hip-hop [were] based on.”

Streamed on Hot 97 as well as Instagram Live, Swizz and Just organically revamped the tradition, as fans from all over the world tuned in. The battle took everyone out their seats, especially Swizz’s drop of an unheard JAY-Z, Nas, DMX and Jadakiss collaboration. The “Thank You” rapper expressed how today’s technology added a new element to the moment.

“We didn’t have these platforms [before] to really promote a real raw filthy under the nail authentic rap battle on this wavelength before,” he said. “To be able to do that and have it live streamed, you’re sharing the culture in ways other people have never experienced–while they’re sitting in their crib.”

Earlier this month during the Floyd Mayweather and Conor McGregor press conference in Brooklyn, Swizz called out Timbaland to take part in the next battle. With both ready to hit the musical ring, Busta is standing behind Swizz. “They’re both going to have incredible moments, but Swizz might give Timbaland a little run for his money,” he said. “He might crack the whip under Timbaland a**. I’m hearing a lot of people talking about how [Timbaland] is going to bust Swizz a**, but I beg to differ just a little bit.”

Busta went on to take the stage with Spliff Starr to perform a medley of hits that span over two decades. Hosted by Angie Martinez, the Crystal Pepsi Throwback tour’s first stop was one to remember with Busta welcoming hip-hop pioneer Kool Herc on stage. He also played his new single featuring Tory Lanez and Vybz Kartel. 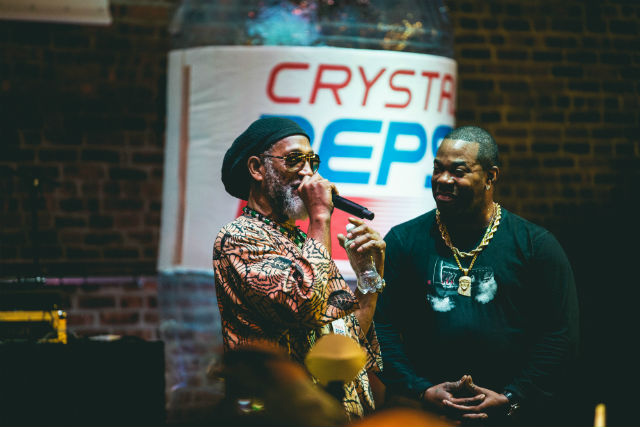 The Crystal Pepsi Throwback tour is an ode to the clear fizzy drink paired with a multi-city tribute to the music that defined hip-hop and pop’s dominant sound. Up next will be performances by Sugar Ray’s Mark McGrath on Aug. 11 in Phoenix and Salt-N-Pepa on Aug. 13 in Miami.

As for the Swizz Beatz and Timbaland battle, no date has been announced. Other battles proposed include The Alchemist vs. Havoc, Harry Fraud vs. Buckwild and the very intriguing Pharrell vs. Timbaland showdown.

Check out the full interview up top.