As the Democratic National Convention continues this week in Philly, more details Wikileaks emails have come to light, including a group of staffers who mocked the name of an African-American employee.

According to Mic, DNC finance chair Zachary Allen and finance chief of staff Scott Comer were discussing a DNC LGBT event involving executive assistant LaQueenia Gibson. Comer makes a joke about Gibson’s name and Allen does little to correct him. 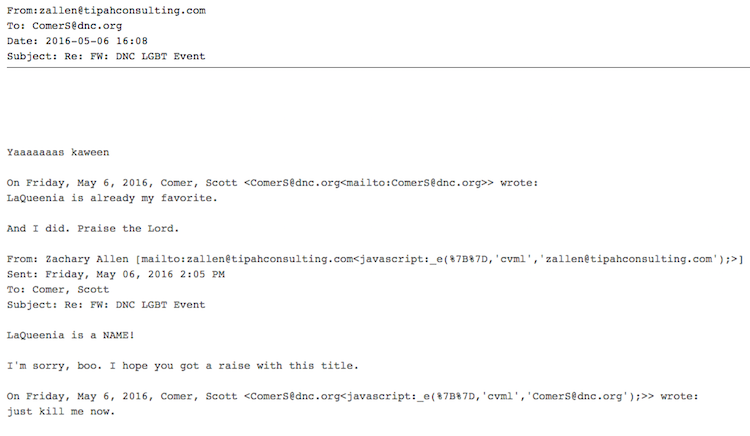 Over 20,000 emails have been released filled with conversations poking fun at fellow DNC members, mocking former presidential Democratic candidate Bernie Sanders’ religion and using anti-gay slurs towards other employees. In light of the leaks, DNC chairwoman Debbie Wasserman Schultz announced her resignation from the seat Sunday afternoon (July 25). “I have decided that in the interest of making sure that we can start the Democratic convention on a high note that I am not going to gavel in the convention,” she said. Instead, Baltimore Mayor Stephanie Rawlings-Blake, who is the DNC’s secretary, opened the convention.

Hillary Clinton hasn’t been named in the leaks, but her camp has made comments on the alleged distraction. “We’re not concerned about our emails,” Jennifer Palmieri, the Clinton campaign’s communications director said on Tuesday (July 26). “The Wikileaks leak was obviously designed to hurt our convention so it’s possible that they could do it — I don’t think they’re done. That’s how they operate.”

Gibson nor the DNC staffers have commented on the emails. The FBI released a statement after announcing their plans to investigate the leaks. “A compromise of this nature is something we take very seriously, and the FBI will continue to investigate and hold accountable those who pose a threat in cyberspace,” the statement from the bureau read.