Fred Barley, 19, made headlines after the story of his six-hour bike trek to Gordon State College went viral. Moved by the homeless teen’s desire to successfully complete his college education, Barnesville, Ga., native Casey Blaney took the initiative to start a GoFundMe campaign to raise funds for the student.

$184,000 later, Blaney claims that “multiple questions have been raised about Fred’s story” in a statement she shared on Facebook. In light of GoFundMe’s review of the campaign, all donations have been placed on hold. 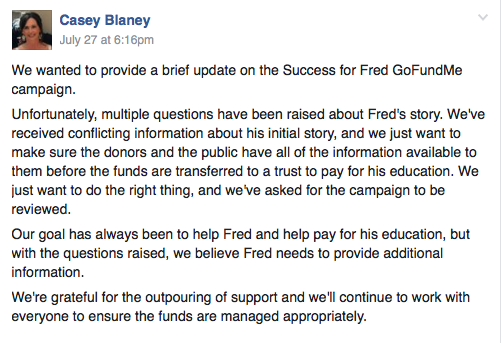 According to reports, the teen disagreed with Blaney’s decision to place the donations in a trust without an attorney and trustee of his choice. While Blaney has yet to specify the source of her dispute with the teen, Barley took to social media to clear his name.

“I’ve had so many people attack my intelligence, my life, my character, and even more important, my integrity. I have not lied to any of you, nor will I,” he wrote.

The college student, who holds on to his dream of becoming a doctor, says that he intends to move forward peacefully no matter the outcome. “I do not care to attack someone else’s character because that’s not how God intended the world to be. Whatever transpires between Casey and I, I want her to still know that I love her and forgive her.”

Since news of the stalled campaign made its rounds online, Barley’s supporters have launched a petition on his behalf which has garnered over 12,000 signatures in favor of releasing his funds so far.