A few months ago, Mackenzie Johnson (aka MAKJ) was the best DJ you had never heard of. Now the labors of this 23-year-old prodigy have evidently born sweet success fairly early in the game. Currently hailed as EDM’s hottest rising star, Mack’s power-packed touring schedule includes headlining Ultra Music Festival and TomorrowWorld, along with his residency at XS in Las Vegas and stops across various world cities. His versatile talent goes beyond the decks and boards. In fact, Mack was a professional race car driver in his youth, which explains his love for streamlined, high-octane, anthem-esque tunes.

“Countdown,” his hotly anticipated collaboration with Hardwell, was released earlier this week on Revealed Recordings. It’s a big room track with multiple layers of meticulously well-crafted production. The track kicks off with bouncy synths, a stomping kick drum, frantic atmospheric builds that leads into the vocal sample and into a steady techno inspired drop. From then on the track shifts gear to a sparkling big-room chord progression, and into a dynamic Dirty Dutch drop. Countdown is already cruising smoothly to the top of the Beatport charts and is available here:

The Assassination Of Haiti's President Jovenel Moïse: What We Know So Far

VIBE caught up with MAKJ to give us a peep into his life and upcoming projects.

‘Countdown’ is the ‘Un-bootleggable’ song, a track with three different drops. It’s a great concept, very forward-thinking stuff. Why did Revealed Recordings decide to release the track now rather than earlier?
We made this track over a year and a half ago. I was inspired to release a track of this sort because I’ve been making bootlegs and edits for a while now. Also playing shows on a daily basis, I’ve noticed that people’s attention span towards any track is very short. When you are playing anthemic, fast-paced kind of music, everyone, be it at a festival or a club, everyone will get bored of a track, if its played longer than a minute or two- it’s like they have ADD- so when I noticed this, I decided to make a track that had three different elements to it, as if to keep people guessing. With ‘Countdown’ I want to be able to bring a new age of Un-bootleggable sound to the forefront.

I feel like Revealed Recordings is such a well-run imprint. They are honestly the ones that have a really great sense of timeline and are tactical with their releases. Their reason being there releases have the ability to steer music in the right direction.

You were mentored by DJ AM? Could you tell us about any memories or advice he had shared with you?
AM was more of a friend to me than a mentor. Yes, he did mentor me in a way but it was more like life mentoring than production tips and scratching etc. I remember I would go see him play when I was younger and he would just smash it each time! A lot of the people he introduced me to such as Steve Aoki are still good friends of mine.

One of the best memories I have of him was about five years ago, when we were just casually hanging out, he told me that if I wanted to become a DJ, and was serious about getting club residencies etc. I should find a way to talk to a man named Jesse Waits- who as you know is one of the main people behind Las Vegas’s nightlife- Five years go by, and very recently, I was approached by Jesse Waits about doing a residency XS. So it’s kind of a trippy, foreshadowing, sort of coincidence, when you think about it.

What kind of cars did you race? How did you get into that? Will you ever sample racecar sounds for a track?
I started out racing go-karts when I was ten. As I got better and older, I started entering more regional competitions and won some races. By the time I was around fourteen or fifteen; I got a chance to race professional for BMW junior-level formula racecars and won the championship here in the States. This led to some really great opportunities to race overseas in Bahrain and China with a lot of international kids. So I ended up moving to Asia to pursue this career path, won some cool races and ended up racing for GP2, which is a two-steps below Formula One racing. But then, I had to quit because… it’s a little embarrassing to say…but I just got too tall.
It’s always a toss-up for me when considering making a track with a racecar sample. At the moment, I do not have any plans to do so, but you never know.

How did DJing come about then?
So while I was in China, a bunch of my friends and myself went to a club over there, and I saw this guy named Q bert spin. The entire night, I was that ‘one weird dude’ who was watching the DJ all night. After his set, I went up to him and I had all these questions; he took the time to answer them and advised me to get a pair of turntables if I was serious about DJing. It was after that night that I was pretty sure, that’s what I wanted to do after racecar driving.

Tell us about your time at ICON Collective. Was it over there where you really understood and got a grasp on writing music?
ICON was a great time for me. It was here where I wrote the bulk of my tracks. My professors and interacting with my peers gave me such great exposure to electronic music. I’m very grateful that I went there; it really honed my production skills.

You were spinning hip-hop records back in the day. Which hip-hop producers, rappers or producers turned rappers are you currently listening to?
I’m listening to Riff Raff right now. I met him a couple of weeks ago, really cool guy, has a very dynamic stage personality.

DJing then production came first for you. From a very early age you understood how to read a crowd. What are some traits or signs you look for when assessing a crowd’s reaction and how you need to steer a set according to their liking, it must feel like having a third eye almost?
When I play, I always focus on the front row and if they aren’t feeling it for some reason or if it’s hard to assess them, I’ll turn to the security. They don’t know who you are or care for that matter, they are used to being in that kind of environment on a daily basis. When you think about it, they really are the best critics because if you can make them move, you’re doing it right. After a show, I always make it a point nowadays to ask the security what they thought of the ‘DJ’s set.’ If they say they like it, then you know you had a good night at work.

So mainstage at TomorrowWorld, what was that like?
Oh man! I can’t even describe how epic that party was. I flew in from Boston at 3:30am, right after my gig. We got to Atlanta, just a few hours before the show; I had just enough time to take a shower and chomp down some breakfast. I was to play on the mainstage, Sunday afternoon and went into the show, very tired with a total lack of sleep. But as soon as I got there, saw the stages and the people, it just sparked a high energetic adrenaline rush in me, and that’s what carried me through my set. Easily one of the best experiences of my life. EVER!

You’re about to go on a bus tour with Bingo Players and Bassjackers across the US. Is it your first time on a bus? Have you mentally prepared yourself for a daily meal of tequila and egg whites?
It is my first time on a bus tour and I’m so excited! I’ve heard so many stories that you have to do the whole road trip thing at least once in your life, you have to treat it like you’re part of a rock band. This whole tour has been put together by a great set of people. I’m looking forward to spending time with the guys and making some great music with them on the road.

Definitely preparing myself for daily egg whites. A lot of people don’t know this about me but I actually don’t really drink much or do drugs, I try to stay healthy that, so I keep away from all of that.

You have a new Diplo remix coming out. What’s that going to sound like?
I do. I have a Diplo remix and a Nervo Remix in the works. Currently, I have two versions for the Diplo track, so I’m still working it out. One is very melodic, very Kaskade-esque and the other one is bouncy. But I have some cool stuff coming up with Clockwork, Deorro and Chuckie too.

Catch MAKJ on tour with Dutch dominators Bingo Players and Bassjackers! They kick things off in Miami! 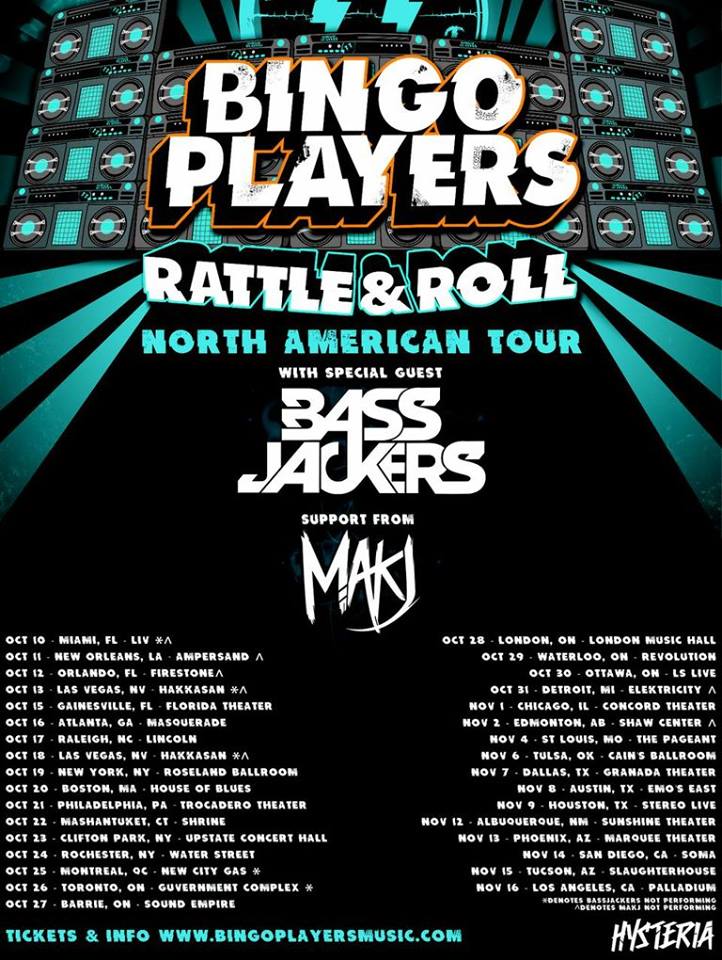