A Missouri bar owner placed Marshawn Lynch and Colin Kaepernick jerseys side-by-side as a doormat, and is under fire for the supposed meaning behind “Lynch Kaepernick.”

“Pretty obvious the lack of professionalism at this bar,” wrote Taylor Sloan, who snapped the photo of the questionable use of the NFL players’ jerseys, on her Facebook. “You lost my business the moment you decided to showcase this kind of behavior…There’s a reason why the NAACP issued a travel warning for Missouri.” 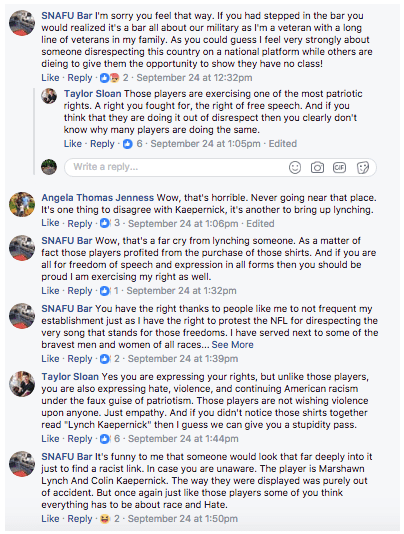 The owner of SNAFU Bar in Ozark, Miss., Jason Burle, is reportedly a veteran, and continued a heated exchange on the social media site over the “doormat.” He was reportedly “offended” by Colin Kaepernick kneeling during the National Anthem, which was the catalyst for a recent protest movement in the NFL.

Burle reportedly wrote “It’s funny to me that someone would look that far deeply into it just to find a racist link… The way they were displayed was purely out of accident. But once again just like those players some of you think everything has to be about race and Hate.”

Since the picture began making the rounds, SNAFU’s “doormat” has been switched around to say “Kaepernick Lynch.” However, Sloan said that there is still a bigger issue not being addressed.

Interview: Biracial College Student Shares How She Was Disowned By White Mother For Defending Colin…

“This is bigger than me or him, it’s about racism so systemic that some don’t even acknowledge it happening, or disguising it as patriotism, which in their mind is absolute,” she said.