The 2013 Billboard Awards had its fair share of rewindable moments, but none can match the sheer epicness of Miguel’s crotch dive into 2 fans. Sure, Prince debuting a new record was nothing short of amazing. And Nicki Minaj’s twerking produced GIFs for days. However, there was nothing more talked about that the VIBE cover star’s mishap. Let’s quickly review exactly what went down. Scene 1 – Miguel hits the big stage to perform “Adorn” as originally planned. Everything is going as planned. The singer is suited and booted. He’s got the crowd eating out his hand as he pours out the vocals of his hit single. https://youtube.com/watch?v=H6v0on1MN4s%3Ffeature%3Dplayer_detailpage Miguel was fully rehearsed and even gave a backstage interview as he prepared for his set: “The purpose for me onstage is to wake people up.” https://youtube.com/watch?v=KC5kGbcFBpg%3Ffeature%3Dplayer_detailpage Scene 2 – With his own live and jamming along, Miguel feels the magic powers of the rock and roll pumping through his blood. Then, he decides to pull an unpracticed move and attempts to jump over a sea of fans to another part of the stage. Things go terribly wrong when the crooner miscalculates the distance. https://youtube.com/watch?v=NVDl8DNfxU8%3Ffeature%3Dplayer_detailpage Two unlucky fans end up getting a taste of Miguel. Just not in the way that they hoped for. Scene 3- Viewers do double takes and Vine videos of Miguel’s leg drops begin to flood the Internet. The world wonders what happened to the girl who caught the worst of the accident. Miguel lets everyone now the innocent bystander is okay: “Got caught up in the moment, thank goodness Khyati is okay,” he writes on Twitter, followed by, “Rockandrollmademedoit.” Scene 4 – Miguel gives a post leg slam interview with Billboard’s editorial director, Bill Werde. 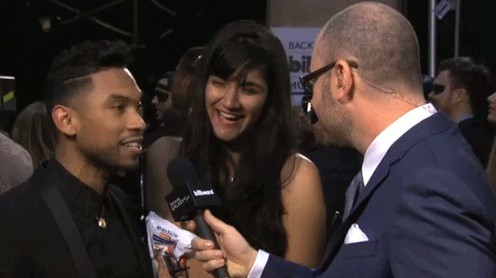 He explains: “Well, I think it’s kind of clear what happened,” he said, looking visibly embarrassed. “But I’m very happy to bring my new friend, Khyati, we just met . Unfortunately we did not meet under the best circumstances, but I think we’re okay.” “The crazy thing is, when you’re performing and you’re just kind of into it, you never know where it’s gonna go and where you’re gonna go with it, and how that might turn out,” he said. “So this is one of the less favorable moments.” “I Adorn him,” she said. Scene 5 (El Fin) – Twitter buzzes about a few fellow R&B singers’ tweets following the incident

Niggaz be looking crazy out here lol. Great effort though.

Aye…yall be wild on Instagram. Yall people that put them pics out so quick

Karma is real. And that’s all I really have to say about that.