On what would have been Tupac Shakur’s 40th birthday, VIBE revisits producer Shock G’s personal and heartfelt memories of his fallen brither-in-spirit and colaborator. From Pac’s earliest wild and crazy days as a roadie for Shock’s Digital Underground outfit to the stories behind some of Pac’s most indelible musical works, it’s all here. Happy Birthday, Pac.—Keith Murphy 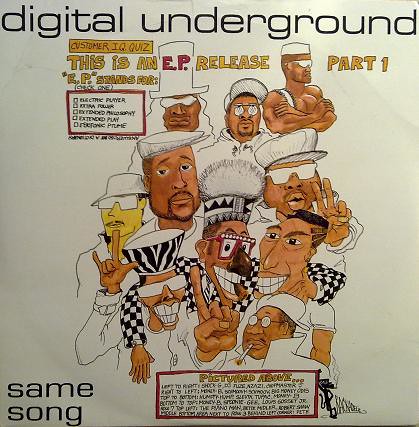 This Is An EP Release–Digital Underground (1991)

“Tommy Boy wanted another album right after the tour, but I told them I couldn’t have an album out that fast…We wasn’t Public Enemy…we didn’t have a Bomb Squad in the studio making our beats. We made all our own shit so we had to start on it when got home. Tommy Boy heard me freaking out, so they said, ‘Okay…just put an EP out to hold people over.’ It was their idea to include ‘Same Song’ on the EP as well as a couple of remixes. That’s why the EP didn’t have a concept, which to me was a sin. ‘Same Song’ was originally featured in this Dan Aykroyd movie called Nothing But Trouble.

This was also 2Pac’s introduction to the public. But there’s one misconception that I want to clear up. Pac was never a Digital Underground dancer. He was our roadie. And out of all the roadies we ever had, he was the best. You never lost anything on his watch. The only thing you could say about Pac was how wild he was. It was later that he started performing onstage with us. Pac would probably get us arrested in every other city because he would pop shit at the police quick [laughs].

Sometimes he would get us in unnecessary fights. He would never back down even if he were in the wrong. But if they were fucking with us and we were innocent, which happened most of the time, we would support 2Pac 100 percent. But a lot of times he was just wrong [laughs]. Our first meeting with 2Pac was set up through Antron. He wanted me to be the ears for him and tell him whether or not he should sign Pac. From there, 2Pac became our label mate. He had presence when he rhymed. But Pac began to become restless so Antron called me in a panic and asked if we could take him on tour with us because he had a feeling that he was losing him. He just got offered a position with the Black Liberation Army at this college in Atlanta.

Pac was ready to take that job and say fuck it because the music was taking too long. So, Pac took Money B’s brother place on our tour with Public Enemy and Big Daddy Kane. He did some dancing onstage, but he was mainly our roadie. At first I didn’t want to disrespect him because I knew Pac was a serious MC. I didn’t want to ask him to dance or be our roadie. I thought it was beneath him, but 2Pac calls me back and he’s like, ‘Hell yeah, nigga…I’ll do that!’ He never acted like he was a member of Digital Underground. We all felt like D.U. was a humorist band and Pac’s message was very serious. But we had already been around the world with Pac on tour and he was ripping up the after parties when we passed the mic around. So we asked him to be on ‘Same Song.’ Even my mother saw that there was something special inside Pac. She walked over to me during the ‘Same Song’ video shoot and asked, ‘Gregory, who is that right there?’ She hadn’t even heard of Pac yet. I’m like, ‘Oh, that’s 2Pac.’ And she said, ‘Watch him…he has that quality. I don’t know what he sounds like. But he looks like he’s a star.’