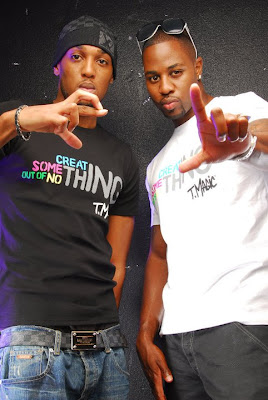 Yo, VIBE.com! It’s your boy, Joseph ‘JP’ Patterson, and I’m back to give you the lowdown on some more UK talent that you should definitely be checking out in 2012. This month, the spotlight is on S.A.S. UK hip-hop is now a force to be reckoned with, worldwide, thanks to the likes of Tinie Tempah, but there were a few others flying the UK flag, be it on a more underground level, way before the ‘Pass Out’ star hit the top of the global charts. If you haven’t heard of Mayhem and Mega, also known as Streets All Salute, before now, then please allow me to introduce you to the dynamic rap duo.

VIBE: For the people who don’t know about S.A.S. from your Diplomats days, can you give a brief history as to who you are and what you’re about…

Mayhem: We are a rap duo from north London called Streets All Salute, also known as S.A.S.. We’re also biological blood brothers. When we came in the game and we were known for being crazy with metaphors and punchlines.

Mega: We’re known for being versatile with the flow and subject matter. We’re fashionably conscious and trendsetters when it comes to a lot of rap moves that have happened over the last decade in UK rap.

How would you describe your sound? You guys clearly have a very different style to other UK rappers out there…

Mayhem: I would say that our sound is global. Our sound appeals not just to the UK, but the whole wide world – whilst still painting a picture of our world here in UK.

Mega: The typical UK rapper sound today would be ‘road’ (street), with the same subject matters revolving around the streets and usually involving pain and struggle, a flashy lifestyle or just straight gangbanging. We’re versatile enough where that would only be a small part of what we would have to offer consumers.

Talk to us about the situation with Diplomats/Roc-A-Fella. How did that come about and how did it end?

Mayhem: We approached Cam’Ron, Jim Jones and Juelz in London outside a studio that they were doing interviews in. They took our numbers and Jim called us the next day, so we went out with them and held them down. That night, Jim invited us up to his room to record some songs on the Mac. By the time that they were checking out in the morning, we were officially London Diplomats. Now, Dame started coming months later – we figured that with him involved, it would speed up our Dipset deal. Roc-A-Fella almost ended up stealing us from Dipset (laughs).

Mega: It ended for us with Roc-A-Fella like it did for everyone else: the Jay-Z & Dame break up at end of 2004. To top that off, we didn’t get back to the States from their side from summer, from 2004 – 2006, due to some flying issues that we had to sort out. When we arrived in 2006, Jim was doing his thing with ‘Ballin’, Cam was awol, so Juelz took us in. Jim had a meeting with us, saying that he was supposed to sort out our deals, our apartment and car, but it never came quick enough. So seeing that we hadn’t signed any paperwork, we left in 2007 and put out an official statement of why we were parting ways with the Set. We’re still cool with Cam today, nevertheless.

You’ve been back in the UK grinding hard for a few years now, but how does the hip-hop scene there differ to the one in America?

Mayhem: Hip-hop is everything over there. It’s a lifestyle, a way of life and, over here; I don’t really think it’s respected like it should be, as far as radio, labels etc. goes. You’ve got unsigned artist in the US on 20k a show. That could NEVER happen here! That’s more than some who have been No. 1 on the pop charts more than once get.

Mega: Our whole hip-hop scene is kept in the underground. Even the only two street artists signed here have police targeting their shows, and them in general, just because of their previous criminal activities. To me, there is no comparison. It’s not championed here at all by the powers that be that really make things blow worldwide. All the love comes from the street, or people who relate to that lifestyle heavily.

What would you say has been your best piece of work to date and why?

Mayhem: I’d have to say ‘Galaxy Fly’, because we always improve on every mixtape we put out and we pushed boundaries on that one. It wasn’t just a street mixtape with the same generic subject matter.

Mega: For me, it has to be ‘Streets All Salute’. We did everything by ourselves on that CD. We even paid for the beats out of our own pockets and had the whole world thinking that the CD came out through Diplomat Europe (which was just a brand that we started and spearheaded, nothing to do with Cam or Jim).

Is it true that you’ve been signed to EMI in New York? If so, how did that happen for you?

Mayhem: Nothing has been signed, yet!  Let’s just say that we’re in talks with a label affiliated to EMI.

Mega: I went to New York on a quick trip and happened to have this meeting, which went really well, and here we are now.

What plans does the label have for you and are you planning to move back to the States to be close to the label?

Mayhem: For now, I think we’re just gonna be based in London and fly into the States for weeks or months at a time.

Mega: The plan is to eventually move there once we get our new foundations laid out.

Have you got any exciting collaborations coming up that the hip-hop world should be knowing about?

Mayhem: Yeah, we’ve got a few, but I’d spoil the surprise if I told you (laughs). Erm, Lil B shouted us out on ‘Dutty Pop’ and we are supposed to remix that. We’re actually working on a collaborative EP now with Cy Fyre from Houston, Texas, who’s produced for Wiz Khalifa, Travis Barker, Game, Wale, Big Boi, Rick Ross, Lupe Fiasco and others.

Mega: The others we’ll keep to our chest for now, but go and check out French Montana’s ‘The Rush’, because it features us! That was a nice collab that we did not long ago.

And finally, where do you hope you guys will be in the 6-12 months?

Mayhem: We want to have a couple of big singles out there, with an album ready to go out to a global audience and a lot of money being made (laughs).

Mega: We’d also like to do a US tour and hopefully get a nice big apartment over there, just so that we don’t have to spend weeks in hotels (laughs).