After five episodes, episode “243” marks the midway point of Black Monday’s 10-episode first season and the pacing is noticeably quicker. The first three episodes spanned the first 26 days before the Black Monday collapse with only disparate clues about the cause of the collapse. The last two episodes span 96 days with Black Monday jumping 52 days between last week’s episode and this week’s. Now, the Black Monday roller coaster is starting to feel like its approaching its descent.

One of the sub-plots of this episode is the news of the SEC sending two new agents to come down hard on the illegality of Wall Street trading groups like Jammer Group. The last four minutes of the episode alone have enough potential blackmail, character dynamic shifts and a climactic reveal that could make Black Monday more cutthroat and violent than it already is. While racing through the Black Monday timeline will almost assuredly yield the sort of reckless humor that makes the show what it is, it also complicates the verisimilitude of parts of its world.

Before, the time skip from episode “339” to episode “295” helped quicken Blair’s character development. Now, Black Monday wants us to believe the same Mo that has an emotional moment of clarity at the end of every episode took the 52 days between the time he saw Dawn locking lips with Blair to find a crude way to tell Dawn he disapproved. That, and the ball-busting, outspoken Dawn taking the same amount of time to address the kiss to Blair didn’t seem plausible for people who have implicated their own families in crimes just to make money. 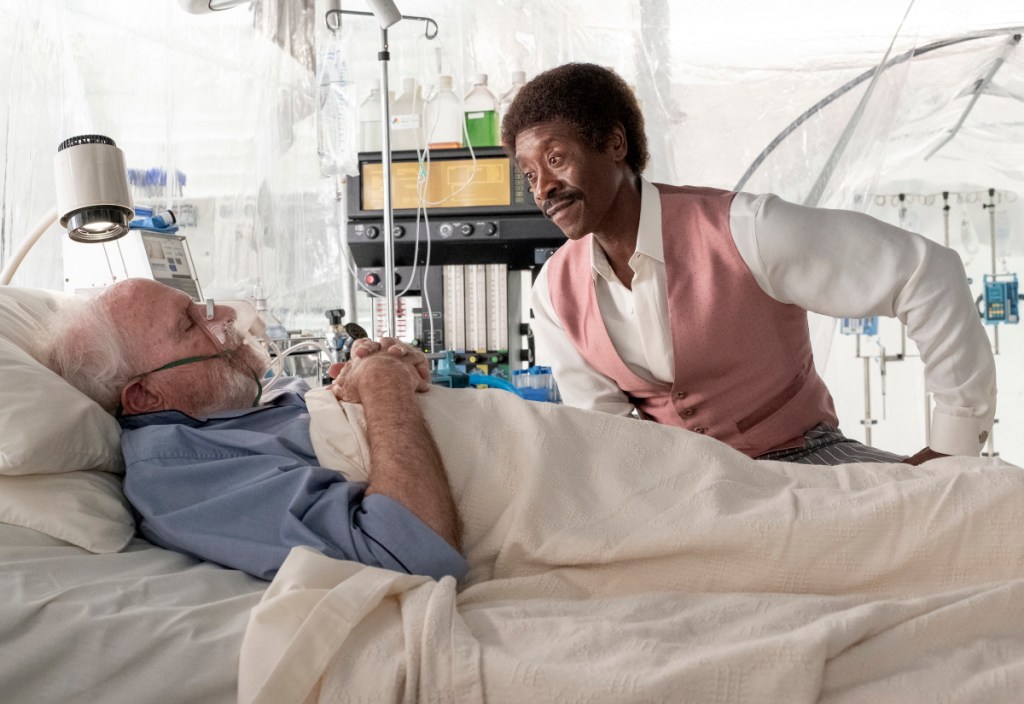 Black Monday employs this fascinating narrative method we call “The Mo Mirror,” where characters that meet Mo become corporeal ills of his life. In episode “293,” turned Blair into a party animal who literally died on the dance floor, momentarily. His intention was to have Blair see how emotionally unfulfilling that lifestyle is and reunite with his fiance, Tiffany Georgina (Casey Wilson). In the process, he was on the outside looking in at his own life and how unsatisfying it is.

In this week’s episode and one of the more emotionally engrossing scenes of the series, Mo faces his future self when he visits The Jaminski Institute treatment center to visit Rod “The Jammer” Jaminski for the first time in years. Rod’s an old, rich white man relegated to hospital bed rest who believes “everything I am, was, will be, is about money,” and appears to be the man who molded Mo into the amoral trader he is.

In one three-minute scene that may surely awaken award voters to Don Cheadle’s magnetic performance as Mo, we find out his idea for the Georgina [jeans] play, the watch on his wrist, his signature “f**k em all” mantra — even his core belief that he’s the only person who loves him, which fuels his ravenous quest for money — were all instilled by Rod. Mo saw a man whose loneliness was so irreversibly deep-rooted that Jammer has delusions of appointments with Hugh Hefner and is genuinely moved by Mo simply touching him. It’s when Mo faces the mirror that love’s value over money becomes clear. The predictability of Mo having his moment of clarity after he leaves Rod doesn’t cheapen it, it emboldens its relatability, with superb writing.

The tragic irony that it’s that moment of surrendering to love that could ultimately be the undoing of his entire quest for money that makes Black Monday must-watch TV every Sunday.

The Absurdity of Wealth

Wealth affords a lot of room for inventive comedy because the unthinkable becomes believable now that it’s accessible. It’s that same specter of absurdity that Black Monday expertly uses to distract viewers from the true intentions of its characters. In the premiere episode, it was hard to see Mo’s grand scheme to lure Blair into his trading group after taking a risk with the Lehman Brothers because blindly arrogant risks based solely on enrichening himself seemed like Mo’s M.O. Similarly, Black Monday has been stitching together a potential criminal mastermind in front of our eyes in TIffany Georgina, and this episode it became salient in the most subtle ways.

When Blair tells Tiffany he has to stay late at work to do compliance, she instinctively knows he means shredding incriminating business documents. She says the only reason she knows this is because her family is rich, implying these sort of legally duplicitous actions are standard for the wealthy. But, these aren’t the first clues of a more calculated Tiffany in the series. When Mo and Tiffany first meet at the end of episode “295,” she remarks how she’s heard so much about him before shooting him an icy, blank stare when he tells her he hopes what she’s heard is all good. She even deems the tie pin she gave Blair as bad luck moments before deciding to give it to Mo.

That same tie pin is seen worn by the person who fell from the sky through Mo’s Lambo Limo in the opening sequence of the series premiere. For a show with as meticulous writing as Black Monday, that seems too coincidental to not be intentional, and Tiffany Georgina could factor into the eventual Wall Street collapse than previously believed.

Cheadle said in his VIBE interview  “things get crazy” in the second half of the season, with the actor requiring a stunt double for certain episodes. Let’s see what unfolds and who survives the crash.