Not only was Eddie Murphy unaware of a reported Coming To America sequel, but he was left in the dark concerning his verified Twitter account, which sent the message out to the masses earlier this week. Bria Murphy, the famed comedian’s daughter, published a screenshot of a message she sent to her father on the matter. “When your dad doesn’t even realize he has a twitter account,” she captioned the post.

Read the original report below.

Eddie Murphy left Coming to America fans in the throes of speculation when he posted a rare tweet on Wednesday night (March 15).

All it took were four words — “Coming to America sequel?” — and a photo of Vanessa Bell Calloway as Imani Izzi in all her “she’s your queen” splendor to send Twitter in a frenzy. 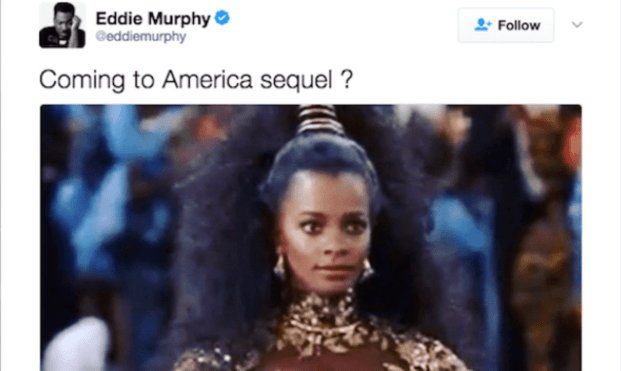 Though the veteran comedian didn’t make it clear if a sequel to his 1988 classic was already in the works or if he was simply tossing out an idea, optimistic and wary fans alike chimed in with their thoughts on a follow-up nearly three decades later:

Eddie Murphy might be making a Coming to America 2?! Say no more haha. Let me go look for the freshest Dashiki fits for me and my Lisa lol pic.twitter.com/u7iJA4WCiS

“Coming to America” Sequel?? Yes!!! BUT, it’s hard to top a classic. It’s probably the only movie I’ve watched over 30 times pic.twitter.com/zOWnSUALAH

@eddiemurphy man you can let be getting everybody hopes up like that lol.

A Coming to America sequel is completely unnecessary.

coming to america is one of those movies that doesn’t need a sequel like leave a classic alone.

A wack Coming to America sequel would break my heart. That movie is in my Top 5

Where do you stand?