VIBE’s own Datwon Thomas was partying it up last night at Club Liv in Miami, where bossman Jay-Z was throwing an epic Watch The Throne release party. Hov went all out, setting a new club record for the biggest bar tab. It was reported, Jigga shelled out a whopping $250K on Ace of Spade champagne.

“After several rounds of regular bottles of Ace of Spade, Jay-z ordered the 15 liter #BOSS $100K,” tweeted promotor Purple with an accompanying TwitPic of the giant bottle in its golden carrier.” via TheFeast

The vibe of the event was all about the anticipation of Hov and Kanye (who was rumored to be overseas). With Liv being the hottest club in the country on Sunday nights (just ask Lil’ Wayne), the place was packed to the brim with models and bottles. Dark and neon tinted, the lighting was straight out of a Hype Williams video. While people were shoulder to shoulder from the dance floor to the stairs, a wooden throne was placed on the stage front and center for all to witness the coming of Jay-Z. Amid all the pre-game bottle poppin’, around 1:15 am Jay-Z eased on the stage, smiled nonchalantly, leaned over one of the couches and retreated to a spot in the cut to commence his bottle buying battle.

DJ Clue grabbed the mic, spun some classics and did most of the hosting for the night, shouting out the various celebs in the house. Jay came from behind his wall of friends and fans in VIP to sit on one of the more visible sofas for a few moments. Seated next to marketing guru, Steve Stoute, Atlantic Records executive, Mike Keyser and Def Jam executive Shawn Pecas, Jay greeted the group of people that got a glimpse of him, bopped to a strong Brooklyn mix and went back to his row of Ace of Spades near the stage wall.

Maybach Music’s young gun, Meek Mill performed the blazing street single “I’m A Boss” on the opposite end of the club’s stage to wild cheers and crowd rapping unison. Meek seemed comfortable, even as he got overhyped with his voice going higher than his normal tweeked pitch. He might have been the highlight of the night if not for that huge mini-boat sized Ace of Spades bottle Hov had opened just prior to Meek’s performance.

Mingling in VIP for the rest of the night was everyone from R&B hit-maker Neyo posing for pics while standing on a couch with a gold bottle, former Kansas City Chiefs running back Larry Johnson rockin’ out to every song played, NY Yankee A-Rod deep in the cut against the stage wall, Diddy’s ex/actress Kim Porter in the mix of it all, Ace Hood and Flo Rida soakin’ in the scene and Daddy Yankee loving the moment. Some of your favorite bloggers and media moguls were in the house as well, like Necole Bitchie, Fresh of Crunktastical.net, Julia Beverly of Ozone Magazine and Robin of BallerAlert.com.

All in all, a good time was had by all. Michael Gardner, CEO of Headliner Market Group, who puts the whole event together every week with parties for the likes of Jamie Foxx, Mariah Carey and Rick Ross, had this to say about the monumental night: “It was one to remember having Jay host the night and giving us the opportunity to make and be part of history celebrating the Watch The Throne release.”

Check out the video that Datwon brought home:

https://youtube.com/watch?v=rY0Xoel35HQ%3Fversion%3D3 The bottles being brought out… 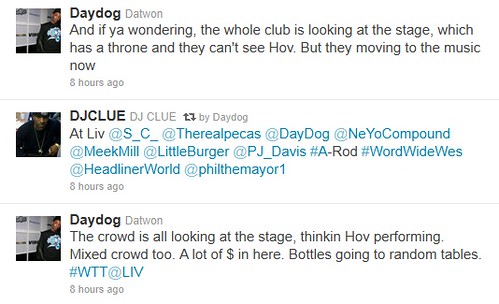