Kevin Hart adds another dramatic role to his resume with the upcoming Netflix limited series True Story. Although he stepped outside the funny box for the film Fatherhood, also available on the streaming giant, Hart makes his small-screen thriller debut. Starring alongside veteran actor Wesley Snipes, who plays a character named Carlton, the 42-year-old comedian portrays a fictional persona named Kid.

During an interview with Entertainment Weekly, Hart and the series’ creator Eric Newman shared details that went into the casting and creation of the project.

“[Hart] called me out of the blue, I didn’t know him, and his pitch was simply, ‘I want to kill someone,'” shared Newman. “He was calling the project, ‘Crazy Kevin.’ But I wasn’t at all drawn to the idea of Kevin as, like, Dexter or Barry. As I did some research on Kevin, I was struck by how ambitious he is, how vast his empire is, and it dovetails slightly with the theory that I’ve been cultivating for a long time, which is the common sociopathy in really successful people: I believe a lot of them are capable of killing somebody. And I certainly thought Kid as a character would kill to protect what he had built.”

The Night School star also shared details on his desire to participate in the series. Hart described taking a chance with this role and being prepared to explore outside of his usual comedic lens.

“This was an opportunity for me to step outside of my norm and partake in a genre of this craft that I never imagined that I would get to,” he remarked. “My road to this type of role has been a long one, and I wanted to make sure that it was something that I could do and have my fan base really believe in, respect, and say, ‘We’ve actually witnessed him work his way to get here.’ Doing The Upside was strategic, doing Fatherhood was strategic, and now doing True Story is strategic. This is about me finding new excitement in my craft, in my talent, and putting it on display.”

He continued to explain how True Story is unlike anything he has played in during his career. 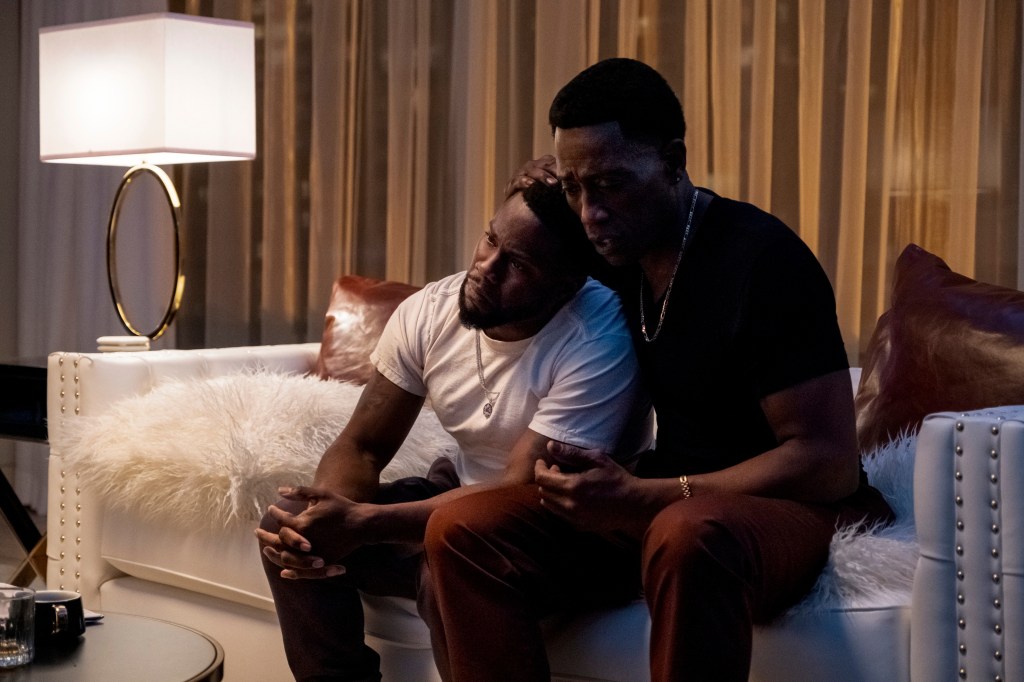 “It’s a thriller; it’s like you’ve never seen me before. It’s a little artistic play. We wanted to raise the level of curiosity, like, ‘What is Kevin trying to say? Is he playing himself?’ We never refer to the character by name, just Kid. And Kid’s life kind of parallels mine to a certain degree, and then it’s exaggerated in some places,” he shared.

“But ultimately it’s a question of, How far would you go to protect the things you’ve worked hardest for? Where would you go to make sure those things remain yours and are never taken from you? I can say just vaguely, because I don’t want to say too much, when life throws certain obstacles and challenges at you, sometimes you don’t even know what you’re capable of. And that was the biggest thing, we wanted to put our character in a situation where he could ultimately shock himself and truly step outside of his norm to become a person that he never had no idea that he could ever be.”

The Think Like A Man star also shared excitement for the chance to work with Snipes, saying “I can’t put words to it. I grew up watching Wesley and emulating Wesley, and the fact that now that’s my guy, my brother, my friend, my costar—it’s everything, plus more.”

Newman, who also helped bring the Narcos franchise to life, described to EW being impressed by Hart’s performance, saying, “I’m really blown away, and yet, also not surprised that Kevin is as good as he is. My hope is that people are going to say, ‘Wow, who would have thought?'”