At some point within the last year of her acting career, Regina Hall called a white man a racist, he thanked her and she loved it. That’s what Black Monday does to its viewers. It makes you see the humor in the horrid. The writing is so callous yet calculated. The louder the laughs, the higher the volume is turned up on the ills of the 1980s until they’re unmistakable and undeniably enjoyable. Hall’s character Dawn embodies that balance as a woman who would rather make money, and sexually suggestive horse jokes, than have a child. Yet, she can still see the value of love. For the 48-year-old actress with a litany of classic roles, the choice to join in on the debauchery was easy.

“I’m a huge Don Cheadle fan. He called and said, ‘I want you to read something. I read it and I loved it. That was kind of it. It was a pretty quick and a pretty easy decision,” Hall told VIBE.

Hall has maintained the authenticity of the Black woman’s voice with acting legend Vanessa Bell Calloway off and on camera, in one episode. She loves that she and Don get to make fun of white people, in another episode. And she spoke with VIBE about it all, including her thoughts on Regina King’s Oscar win, and how the show made her rethink the ’80s.

VIBE spoke with Don Cheadle earlier this year about the show and told him my favorite line said by Mo: “I went long on condoms because I knew [AIDS] had legs.” What did you love the most about the show’s writing?
Regina: I love that rapid-fire dialogue. I love that it’s so honest and politically incorrect, and we get to do that because it’s set in the ’80s when things were that politically incorrect. And we get to have commentary on stuff people didn’t know. Hindsight is everything. So now we can not make fun of it but have [lines like], “I went long on condoms because I knew that shit had legs.” The writers are great about taking things and ideas that are timely but also making them funny without marginalizing the reality of what AIDS meant. But there was this callousness that existed back then.

I agree completely. With all of the absurd humor, there are some really deep commentaries on the show. One that sticks out the most is your dinner table scene with Vanessa Bell Calloway, who plays your mother, from episode “339”, which tackled Dawn prioritizing her career over starting a family. What do you think of that message?
I love Vanessa Bell Calloway, first of all. I’ve been a fan of hers since I first saw her on All My Children [in 1985]. I love that commentary about her saying, “We don’t want that money. It’s greed money.” I loved her having that opinion. So when we shot it, figuring out that mother-daughter dynamic, and understanding what that was, was great. I loved the dialogue. I loved the relationship. I loved her Nefertitty painting and the fact that my momma wants to be an artist.

Our showrunners are so great. Before we had the scene [of my mom showing me her paintings], we talked about it. One of the things we talked about was, she was about to say the F-word and I said, “You know, as a Black woman, we can’t say that in front of our mothers. So, can I take the beat where I’m almost about to say it, but then I’m like, ‘I better not.'” It’s those nuances like that that everyone is so conscious of and open to. It allows it to feel real even though it’s a comedy. There are so many authentic moments in it that are great.

There are so many strong woman characters that carry a lot of these episodes as well. The scene where you (Dawn) and Casey Ann Wilson’s character Tiffany discuss love at her bachelorette party is probably one of the top 3 scenes of the entire season, so far.
She’s so phenomenal on the show. She’s just incredible to watch. She’s not necessarily what I would’ve thought of when I first read it. But, I can’t imagine anyone else. She’s so rotten and likable. These people are so incredibly flawed but likable. You don’t even know why you like them because they’re really selfish people…but they’re great!’ 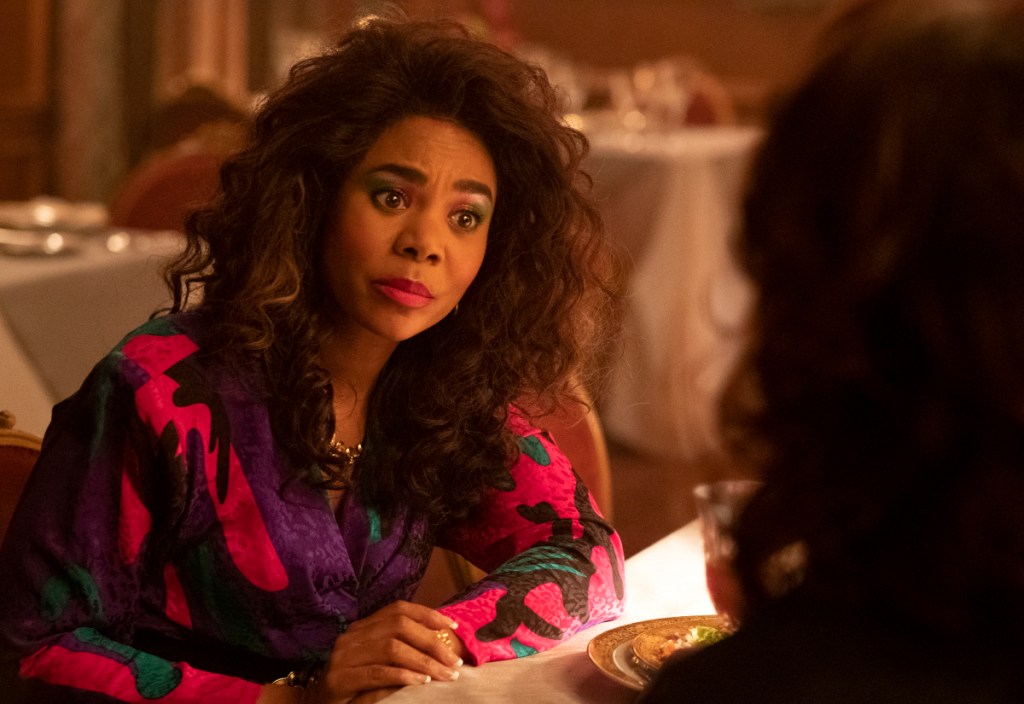 In the penultimate episode, Tiffany decides to betray her family and get money from it. I love that the writers of the show did things like make her parents kidnap her for profits in the prior episode or have her know all these illegal things in other episodes because she was wealthy.
Yes!

Are there any other nuances like that that you think people should look out for when watching the show?
I ultimately want people to enjoy it. I’ve found that different people relate to different things. There are very subtle things in the show, like what it’s like growing up like Tiffany, with money. Tiffany said one of my favorite lines, “Nothing ruins a brand faster than seeing it on a bum.” I’m like that is clever. I love that it’s the truth for her in her world. It’s why I love why Mo is so unapologetically Black. I love that they feel really Black on Wall Street. Mo does. Dawn does. They’re trying to make it big in the world. But, they are being their true selves.

When I talked to Don he said a lot of what happens on the show is improv. He let us in on the fact that you mounting Paul Scheer and thrusting in his face in the series premiere was all your idea on the spot. What went through your mind in that scene?
I thought, she’s one of the guys. It’s just something that guys do. I think for Dawn’s character, so often in shows, the woman is the smart one but she’s also the joykill. I wanted to make sure that although you can feel like she is the smart one and business-minded, she’s also not uptight. I wanted to make sure that Dawn did not feel in any way like, “Oh gosh, here comes Dawn.”

Even when she [interrupts] their circle jerk in [episode “339” ]. That’s more about her having to find Mo in an emergency rather than saying, ‘You guys are dumb.’ In the sexual harassment training scene, Dawn says, ‘Her a** meant nothing to me.” For her, it’s like she’s one of the guys and she doesn’t make a thing about it at all.

You’re definitely full of surprises. In episode “7042”, you started singing when Mo was mourning a death while out on the dock.
Oh my… I know (laughs). Something’s wrong with Dawn.

You sounded alright.
Really? I thought I sounded crazy. I don’t know. It was just a moment where we could take that moment and find some humor in it. There’s all these moments where we get to see these people as people. That’s what makes this show unique. It does have dramatic moments like the moment Dawn says she thinks she likes Blair. Then, of course, the finale’s coming out and I can’t wait for you to see it. 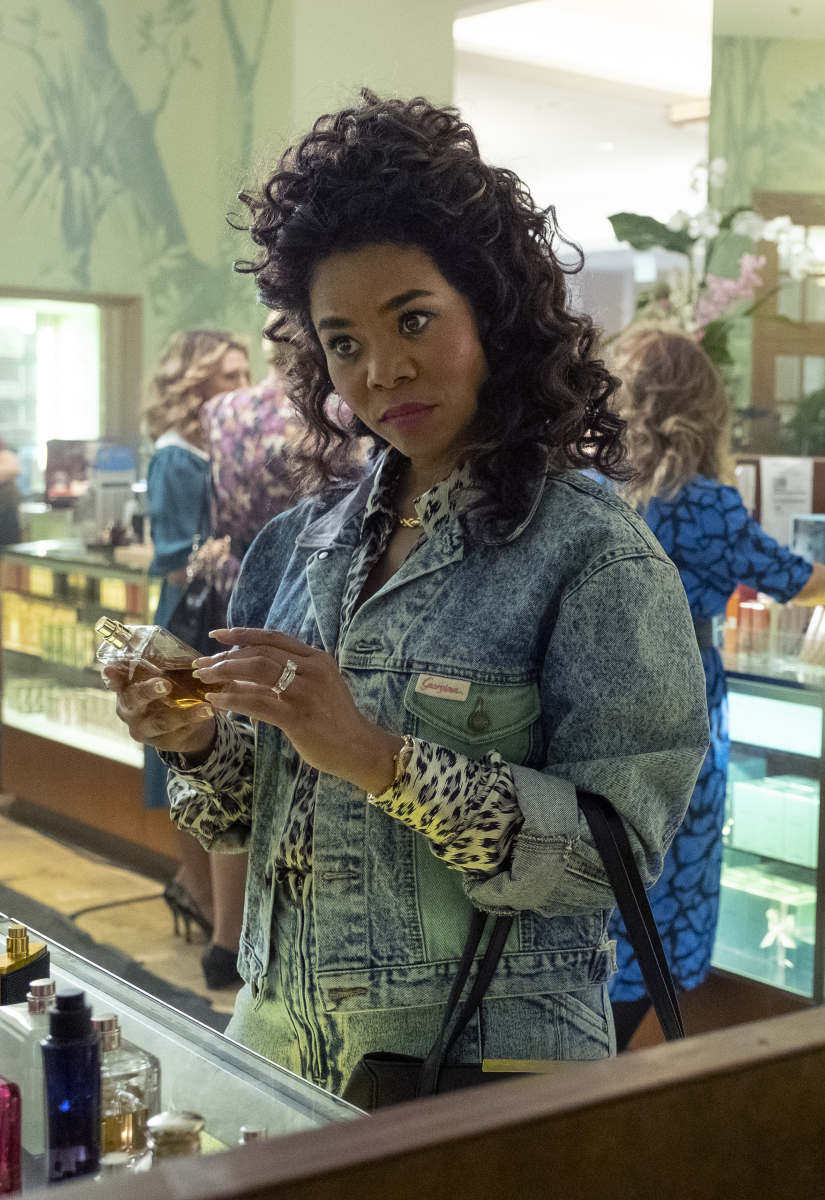 Black Monday‘s most interesting aspect, comedically, is how it uses that hindsight you were talking about to really question ’80s pop culture. It shows the really bad side of movies likes Soul Man, Hogan’s Heroes, and Sixteen Candles. Were there any from the show that made you look at that time differently?
Or, I never thought about it that way. Yeah, all of them. Truth is, Hogan’s Heroes was a comedy set in a concentration camp. I did see Sixteen Candles and one of the things is Jake does say while she’s asleep, “You can have sex with my girlfriend,” which is, like, date rape. There’s a line Dawn says where she goes, “Listen, you can’t go by sitcoms. There’s two Black midgets playing rich, white people’s kids.” We’re talking about Gary Coleman on Diff’rent Strokes and Emmanuel Lewis on Webster. There were strange things happening on shows back then that were surprisingly ok.

Our showrunners are amazing. I love when Dawn askS, “Is he getting weirder?” and Mo says, “He’s definitely getting whiter.” I love that you have two Black people talk about white people. Not in a bad or racist way. Just saying they’re different. I also like the way they handled racism. A lot of the show is improv where we just make up a lot of stuff. But one of the scenes I love was the one with the Lehman Brothers [in episode “243”] that I did. They’re like, “She knows what’s racist, she’s Black.” And I say back, “Guys, don’t worry. I know you’re racist.” And they don’t say they’re not racist, they say, “Thank you.” I love when they go, “Listen, Dawn. You’re very smart, which, normally, we find repulsive in a woman.”

But then there’s a genuine affection and love. I love how they handled the gay storyline with Keith. It’s actually real love. It’s not hot and heavy sex. He [Keith] really loves him [Mike].

I’d be remiss if I didn’t get your reaction to Regina King’s Oscar win earlier this year.
I was really excited. Regina’s done work prior to [If Beale Street Could Talk] that’s been incredibly worthy. She’s been in the business [for] a long time. She’s talented, kind and smart, so I was really excited. Also, Spike Lee‘s been a part of my whole life with his films. I was excited for him and his success. I loved seeing it. I was really happy and thrilled for them. All of it last year was exciting for Jordan Peele. I was home cheering like a fan, happy for the people I know and love.

Catch the ‘Black Monday’ season finale on Sunday, March 21 at 10p/9c on Showtime.