Because laughs are important, it didn’t take long for Twitter to turn the Academy Awards biggest fluke of the night into a slew of jokes. On Sunday (Feb. 26) after La La Land was mistakenly given Moonlight’s Best Picture Oscar, those over at the digital peanut gallery provided other alternatives cards for winners.

After the ceremony’s PA’s jumped on stage to find the correct envelope (there were three floating around),  La La Land’s Jordan Horowitz held up the correct card for all the world to see, promising the cast it “wasn’t a joke.” The film cleaned up technical categories like Best Orginal Score, Best Cinematography and Best Actress, Best Director, Best Orginal Song and an award for Production Design while Moonlight took home a Best Supporting Actor (Mahershala Ali,) and Best Adapted Screenplay, on top of their Best Picture award. 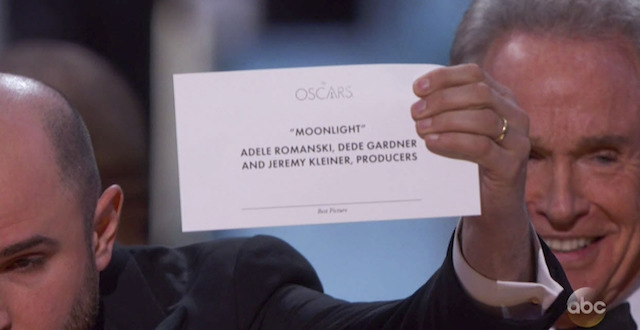 Those who received the meme treatment were Beyonce due to the controversy this year’s Grammys for their Album of the Year award and Hillary Clinton, who won the popular vote in the 2016 presidential election to Donald Trump.

Have a few laughs below.

Has anyone done this yet pic.twitter.com/zTK1t0hI4D