Divine (Julian Elijah Martinez) has been the caretaker and head of the Diggs family for years, and after a couple of short months, he’s learning everything in his world can function without him. Following advice from his attorney, Divine pleads down his drug charges with claims of addiction instead of intent to sell. The award-worthy performance works, and the judge shows mercy, granting Divine parole in a halfway house. The first blow to Divine’s ego comes almost immediately, hearing his friend-in-the-game-turned-enemy, Power (Marcus Callender), laughing heartily at his church-testimony schtick from the back of the courtroom.

When Divine gets home, he realizes there may not be a swift return to his idea of business as usual. Even though big brother Divine has pushed Bobby (Ashton Sanders) to step up and handle business and himself since their time visiting family as children in North Carolina, he’s resentful when he realizes Bobby actually did it. The look on his face when Aunt Laurie (Diane Howard) says Bobby paid for the family’s dinner isn’t pride, but annoyance. After dinner, he heads down to the basement to tell Bobby and Dennis (Siddiq Saunderson) that it’s time to get back to “real” work. Bobby points out that the bills are paid; things have been working, but Divine calls Bobby and Dennis’ Wall Street hustle “bullshit.” He’s not happy with simple maintenance; he was working to build an empire, now all of that is gone. When he gets in Bobby’s face in a way that would have quickly backed his brother down before, Bobby holds his ground…and reminds Divine he’s got curfew back and the halfway house. And we…oop!

We’re thrilled Aunt Laurie is still visiting and stirring up exactly the kind of mess we knew she was capable of. She’s flirting with folks at Linda’s job in her fly Pelle Pelle coat (much to Linda’s annoyance), and dolling out gifts like a ‘round the way Santa after her “numbers” hit. Linda (Erika Alexander) is side-eyeing the generosity, though, because she knows her sister stays scheming. Hitting the lotto at the restaurant where Linda works for a mob-affiliated boss seems a little too convenient. Ms. Diggs gets on her sister for doing the most (and, frankly, Linda was hating a little) and Aunt Laurie breaks out. Unfortunately, Linda was right about her sister, but we’ll come back to that. 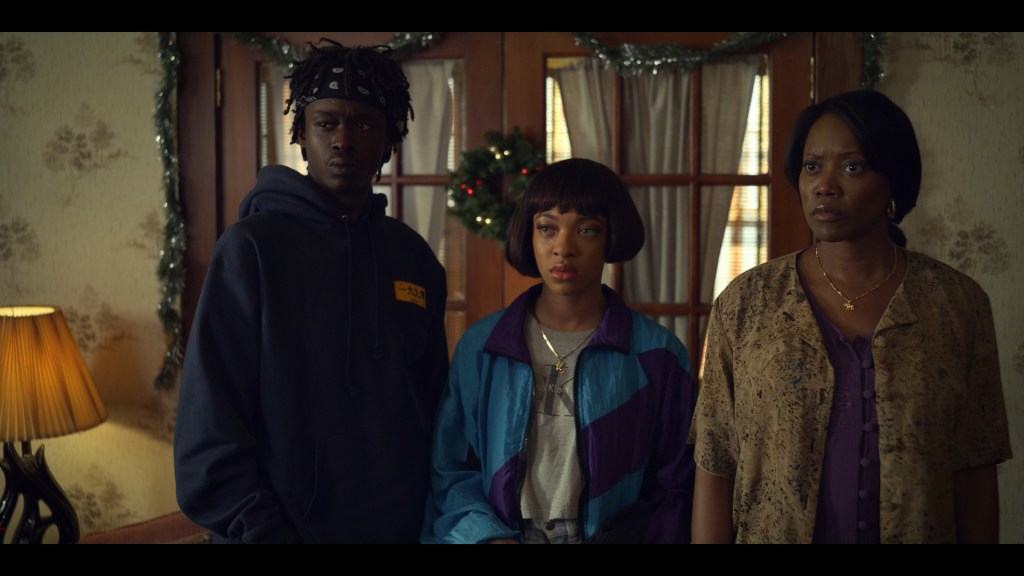 Divine continues to find his new reality challenging. In his mind, he’s still a boss. But he’s filling out a job application for a pizza shop (a requirement of his parole), getting an expensive Bulova watch from his girl when he’s used to being the gift giver, unable to fulfill his role as family protector when his little brother insists on handling an issue for his mom, and unable to get Haze (Malcolm Xavier) to front him product so he can get back in the game. To add insult to injury, Haze is bigging up Bobby’s music, which Divine thinks is a waste of time.

His girlfriend Nia (Ebony Obsidian) tries to talk some sense into him when he asks her to drive him to a Dominican connect, telling him this isn’t really about him needed to help his family, and no one who loves him can bear the stress of him going back to jail. Divine doesn’t have his position in his household, can’t get a spot back in his organization, and has now lost his girl. But he goes and cops the brick anyway, almost risking his freedom to do it.

After Laurie’s gone, Linda and the family get a surprise visit from her boss Larry (Vincent Pastore) and some undesirable gentlemen. In a scene that was Jordan Peele-level uncomfortable, Linda and Bobby learn that Laurie and one of the restaurant staff member manipulated the lotto, and Linda is responsible for making it right. Linda demands Shurrie (Zolee Griggs) hand over the tickets Laurie gifted to see August Wilson’s The Piano Lesson on Broadway, so she can sell them, telling her they were copped through ill-gotten means. Shurrie’s (understandably) taken aback, since their entire household is held together by drug money, but Linda’s not trying to hear that. Shurrie goes get her culture on anyway – without the company of Dennis. 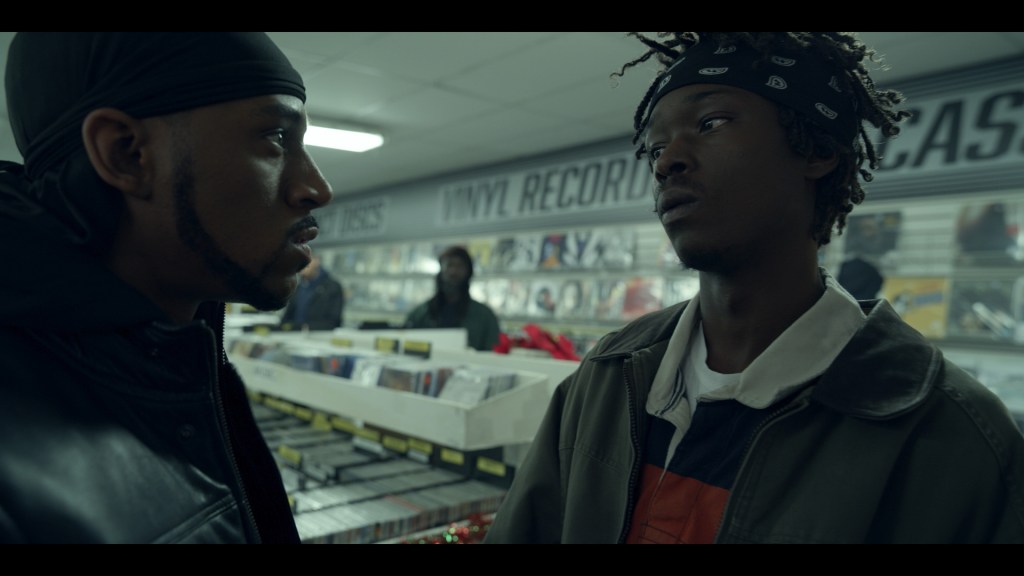 While all of this is happening, there’s a music battle building in Shaolin, and we’re getting closer to Wu-Tang actualization. Bobby and Shot Gun have a joint that’s blazing through the neighborhood – this is when going viral meant getting play in local record stores, blasting from boom boxes on the streets, and dubbing tapes for your friends. Bobby’s getting props for his beats, finally, and Shot Gun (excellently captured by Dave East. He has Meth’s whole swag down) is feeling himself. Bobby stocks up on blank tapes to keep up with demand: bright yellow cassettes with black trim that Shot Gun likens to killer bees swarming the hood (foreshadowing!). When Bobby passes a tape off to Dennis, Dennis does the typical Dennis ish and gets offended. He doesn’t understand how Bobby could get behind what he perceives as a diss track to Stapleton. Bobby’s been pushing Dennis to take his talent seriously, and his rage behind Shot Gun’s perceived disrespect finally gets him into the booth to lay down a track of return fire. This makes Sha (Shameik Moore) the last rap holdout – and Shot Gun was close to reeling him in – then the hating ass (but kinda cute) cop broke up his hallway rap battle. But now Bobby is seeing that his passion can net real results. Holding down his family while his brother was inside plus his music hitting in the streets has his confidence on 100. While Divine was in jail, Bobby became a man.

What The Episode Got Right: The neighborhood record store as the location to learn about, hear and discuss new music filled us with nostalgia for the days before digital music. We also really loved reminiscing on the days of dubbing friends’ tapes.

What The Episode Got Wrong: Some of Linda’s behavior felt out of character this episode; specifically her seemingly having a problem with Shurrie being encouraged to do something just for Shurrie. But considering how much responsibility the sole Diggs sister carries in the house, maybe we just weren’t paying close enough attention.

What We Could Do Without: Whatever that “ni**a” song was, it was a lot. We know it was supposed to be a lot, but it was a lot.

What We Have Questions About: Haze. He’s the most civil, normal, measured, polished street dude in all of Staten Island. What’s his story?