The story of the Wu-Tang Clan is a story of rap as a way out of the hood, but it’s also a story about using talent to break cycles and beat the system. Episode 6 focuses on perspective, point of view, and how they shape realities. What happens as our characters dare to look past Park Hill and Stapleton Houses to the world beyond? And how many visible and invisible barriers are in place to prevent it from happening? Using NYC’s official mascot, the pigeon, as a tour guide, our journey starts and ends at the Coles’ house, where Darren’s (Amyrh Harris) view is usually limited to the world immediately outside their Stapleton window.

At the Diggs’ residence, Randy’s Undependable Ni**a Association of America-certified father, Jerome, has shown up out of the blue (they stay having people show up with no advanced warning). Of course, he’s played by Bokeem Woodbine because would it even be a ‘90s hood narrative without Bokeem Woodbine? He sweeps in, making promises of houses, lawns and clean air in the great state of Ohio… as soon as a deal to sell some land he’s been “sitting on” goes through. Sounds like undependable ni**a rhetoric to us, and to Linda (Erika Alexander), who has more pressing issues on her mind — namely paying the debt to Fat Larry (Vincent Pastore) and associates that her sister left behind. As Linda is counting her savings in the First National Bank of Black Mamas — aka the coffee can — we set a timer for the moment it’s discovered that Jerome took the cash and broke out.

Shurrie (Zolee Griggs) is pissed that Jerome’s visit has disrupted her household schedule — because she does technically run the household, especially where little brother Randy’s concerned. “That’s your problem,” Jerome tells her, “too busy acting grown when you ain’t.” When she complains to Divine, he basically tells her to calm down; he now understands what it’s like to get out of jail and feel like the world’s left you behind. Plus, at least Randy’s dad is coming around, unlike theirs. When Dennis (Siddiq Saunderson) stops by to drop something off for Linda, Shurrie takes the opportunity to confront her boo about his distance. 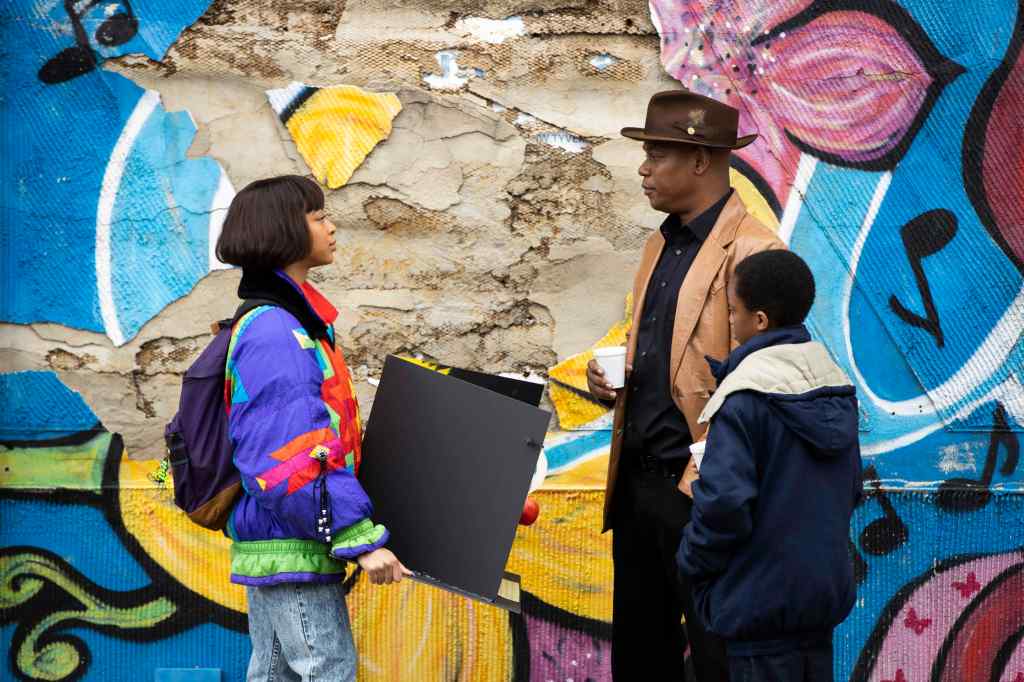 He’s been funny style since their conversation about a future together. Dennis, who’s been in the middle of solving yet another problem at home, emphasizes to Shurrie again that his family is always going to need him, and he doesn’t want to put that weight on her shoulders. Shurrie tells him that’s not his decision to make, and she’s tired of everyone seeing her as a little girl; she’s almost a grown woman (they could have just inserted a chyron that said “And then, she got pregnant” here, the foreshadowing was so heavy). Shout out to Dennis for being all about the hair scarf lovin’, though. He knows what’s up.

Bobby (Ashton Sanders) is still trying to uphold his responsibilities to the household, which now includes helping his mom pay back the mob. But his business is slowing down for the winter. Over in Park Hill, Rebel (rapper Joey Bada$$) can tell Bobby how many hood spins his single with Shot Gun has every day before the kids head to school and the mailman comes, but he ain’t actually trying to go outside to sell product. He’s content to observe the world of Park Hill from his window until the weather breaks, prompting Bobby to compare him to “that inspector from the Pink Panther.” (Seed for “Inspectah Deck”: planted.)

Bobby’s money coming up short means money for his mama comes up short — Linda owes interest for paying late — which means the family is vulnerable. On top of that, even after solving this week’s payment, next week’s is looming. Bobby gets an idea from the record shop owner to grab Dennis and venture beyond their side of Satan Island to do business at a burger joint literally called “White’s” (I guess they didn’t want smoke with White Castle). They have a great sales night, but Bobby decides he wants the full tourist experience and tries to get at a white girl, spitting game about Blondie’s and New York City’s bastion of punk music, CBGB. He and Dennis subsequently end up in a fight with locals who no doubt grew up to vote for Trump (if you want to know anything about Staten Island outside of Wu’s side of town, know it’s the only NYC borough that went to 45 in the election). They give Bobby a pretty serious gash over his eye and run his and Dennis’ pockets for almost all the money they just made. Bobby dispatches Dennis to give Linda what little money is left while he goes to get stitched up. 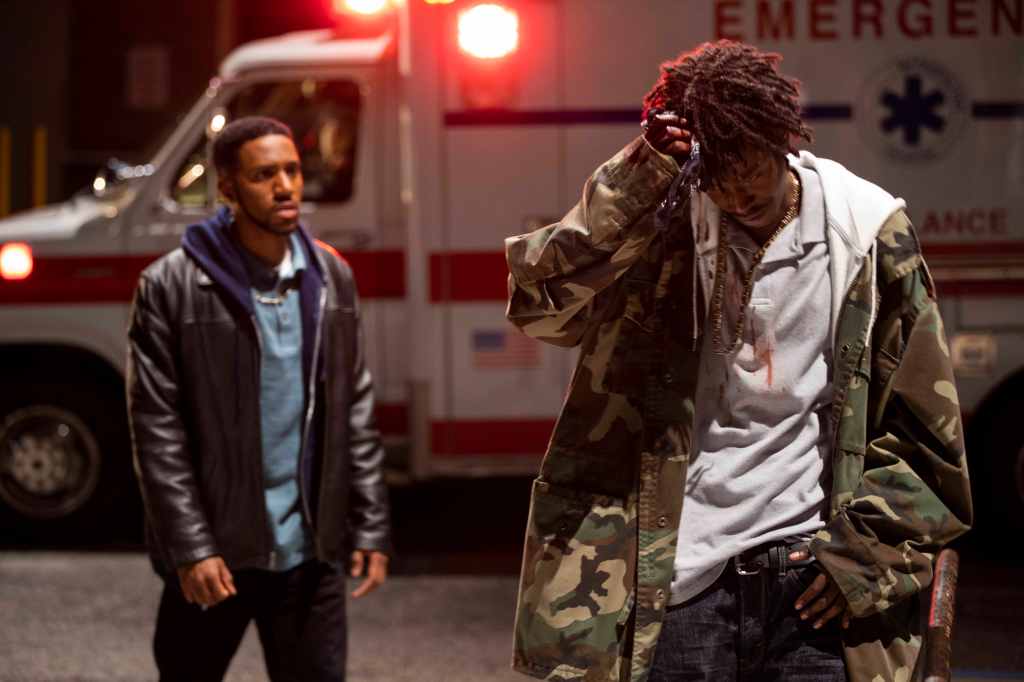 Linda heads to work stressed about how she’s going to handle the balance due for the week and is shocked and surprised when Paxti (Antoni Corone) passes her outside the rib joint without incident. She’s even more surprised when she walks inside to discover Jerome paid her debt in full. He figured out her trouble with Fat Larry while questioning Randy about Linda’s love life and decided to step up. Maybe we had you pegged wrong, Jerome. Our bad. He begs Linda to change her outlook and trust him, just one more time. Looks like Ms. Linda is ‘bout to get her groove back.

We spend more time in and around Park Hill this episode than we have previously, and Shot Gun is now a local star. As Rebel reported to Bobby, “Killa Hill” is still being bumped non-stop. Shorties are getting his number, cats want the opportunity to beat him in a rap battle. He’s the only eventual Wu member, aside from Bobby, committed to using his talents to get him out of the hood and tells Haze he’ll bring him along as manager. We also finally get some insight into Haze’s leadership, composure, and code-switching adeptness: he’s former military. He tells Shot Gun how much love he got in Germany when the Berlin Wall came down and that he’d consider going back to stay. Even though young Clifford has his eye on a life beyond Park Hill, Germany ain’t it: “That’s like a lion saying he’s gonna leave his own land, and put himself in a cage at the zoo.” But Haze’s experience in the world has given him a self-confidence that goes beyond street braggadocio, “I’d still be king of the jungle.”

Sha is peepin’ Shot Gun’s shine, and feeling a way. He’s low key annoyed that Bobby gave Shot Gun such a hot beat, but Bobby had been trying to get Sha to lay something down forever. Sha finally gives Shot Gun the freestyle battle Officer Marcus interrupted previously. And Officer Marcus is about to come jack it up, again.

A few feet away, Ms. Burgess, the neighborhood elder, has a cozy slice of comfort inside her well-appointed, well-maintained home. Inside, Nina Simone is the soundtrack and Ms. B carries a running commentary about the good ol’ days with her late husband Curtis. But the civil rights era survivor is plagued by the non-stop noise and profanity of rap battles and drug deals right outside her ground-floor window. 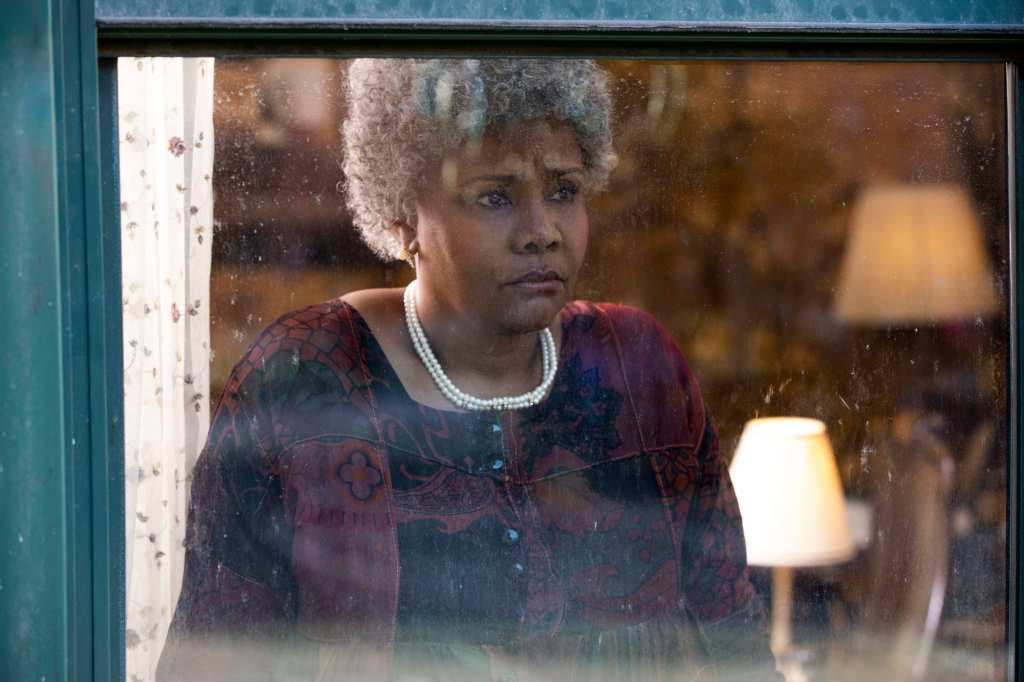 After begging Haze to get the young guns in line, since they listen to him, she tries dealing with them herself. When that goes left, she’s disrespected with a thrown rock, broken china and a destroyed quilt before calling the police. Dammit, Ms. B.

Meanwhile, Divine is still trying to get back in the game, despite the urgings from literally everyone around him. He’s secured a buyer for his product in Park Hill, but when he gets there to complete the transaction, he learns dude was picked up by his parole officer. As he’s heading out, deflated, he sees the police responding to Ms. B’s complaint. Now he might eff around and get sent back to jail himself. His girl won’t let him stash product in her apartment, so he dumps it down the trash shoot. Money gone, but freedom saved, as he bumps into a cop and gets patted down immediately after.

Outside in the courtyard, Haze does what Ms. Burgess initially charged him to do, encouraging the young men to stay calm and cooperate so the incident with the cops doesn’t escalate unnecessarily. Officer Marcus, also from Park Hill, isn’t feeling the street muscle outranking his badge and decides to assert his authority — and escalate. Haze not only refusing to back down but insulting him in front of the hood and his officers, drives Marcus to pull out his taser, which then leads to a scuffle between the two men. As Shot Gun, Sha, and Rebel watch from elevated positions, separated away from the fray; Ms. Burgess watches in horror from her window, realizing what she put in motion; and Divine tries to get to his friend, risking violation of his parole in the process; Officer Marcus chokes Haze to death, insisting “I run the streets!”

Outside of the basketball court, however, life moves forward. Bobby heads home from the hospital; Ms. Linda and Jerome are cozied up, perhaps contemplating life in Ohio, and Dennis and Shurrie are finally moving publicly as a couple. Our friend and guide, the pigeon, comes back to rest outside of Darren’s window. 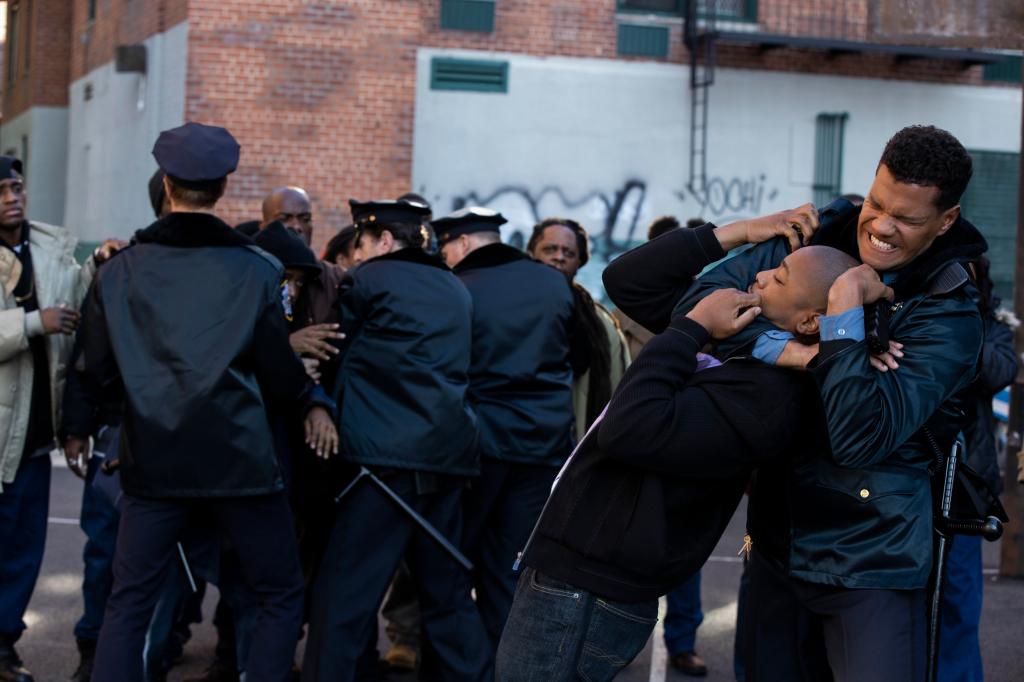 What This Episode Got Right: The immediate assumption is probably that the tragic scene with Haze and Officer Marcus is in homage to Eric Garner, the black man killed on Staten Island in 2014 via asphyxiation; the result of a police officer restraining him in a chokehold for a non-violent offense. Unfortunately, the tension between black men and the NYPD long precede #BlackLivesMatter and was especially thick in the early-mid ‘90s. Haze’s death was based on the life of Ernest “Case” Sayon, who grew up with Shot Gun in Park Hill and died following a struggle with a police officer — who put him in a chokehold — over what Method Man has said was a misunderstanding about fireworks. The officer was acquitted.

Oh, and people needing to get your permission to use your phone to call long distance was real. Phone bills were really the biggest scam ever.

What This Episode Got Wrong: Haze bucking up to a police officer as former military felt a bit off, but street code supersedes rank and file. And the police on the other side of Staten Island would probably have arrested Bobby and Dennis instead of just leaving them there. But nothing stood out as a big “nope” for us this episode.

What We Could Have Done Without: The use of the pigeon was overdone, although the various framing shots were fantastic, Ms. Burgess’s speech to the Park Hill kids was also too much; very Mother Sister in Do the Right Thing. We actually exhaled when somebody through a rock, because no way would that have worked in real life.

What We Have Questions About: Where did Jerome get the money to pay off Fat Larry and ‘nem? We still have our eye on him.

'Wu-Tang: An American Sage' Episode 7 Recap: On Another Level of Plannin’