The Cudell gazebo in Cleveland where 12-year-old Tamir Rice was shot and killed by rookie cop Timothy Loehmann is an official stop for Pokemon Go users, and once they arrive, the tragic event that thrusted little Tamir into the spotlight is also commemorated.

“Community memorial for Tamir Rice, shot and killed by CPD officers who shot him in under 2s after breaking department policy regarding escalation of force,” reads the Pokéstop description.

Tamir’s death on November 22, 2014, made national headlines as yet another example of law enforcement killing African-American men and women. The horrific video shows Loehmann gunning down the youngster who was playing with a pellet gun before his patrol car came to a full stop. Cuyahoga County prosecutor Timothy J. McGinty urged a grand jury not to indict Loehmann, which resulted in Loehmann not facing any consequences for his actions. Instead the city of Cleveland paid $6 million to settle the federal lawsuit filled by the family. 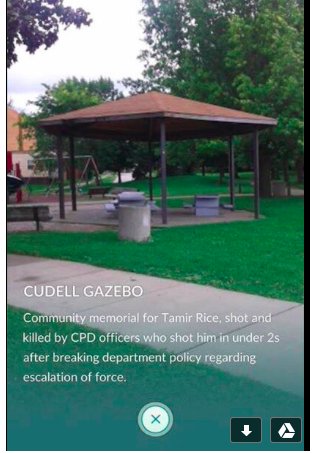