One educator is coming under fire for a seemingly innocent gesture. According to the Fayetteville Observer, a Cumberland County history teacher was placed on paid administrative leave for stepping on the U.S. flag, which was part of a lesson on the First Amendment, particularly freedom of speech.

The lesson stemmed from the 1989 case of Texas v. Johnson which protects the debasing of the U.S. flag under the First Amendment, The Root reports. A picture of teacher Lee Francis at the Massey Hill Classical High School made its rounds on social media after a student’s mother, Sara Taylor, posted a picture of Francis standing over the flag on Facebook with a lengthy opposition.

“That flag might not mean anything to that teacher, but it means a lot to us and it means a lot to the family’s who had their service member come home to them in a casket with that flag draped over it,” Taylor said. 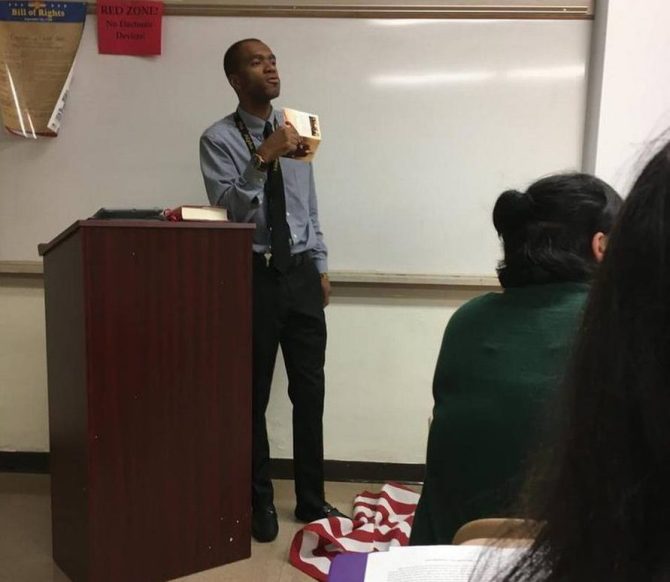 North Carolina’s American Civil Liberties Union is backing Francis in lieu of his gesture. Spokesman Mike Meno for the organization shared that, “One of the reasons our country is great is that the Constitution gives people the right to free speech and expression, no matter how much others may disagree or be uncomfortable with the message. And that is certainly a lesson worth teaching. The very freedoms and principles that the American flag represents include the freedom to stomp on the flag.”