Former Republican Congressman Joe Walsh came under fire Thursday (July 7) after he made threats towards President Obama and the Black Lives Matter movement in a now deleted tweet. His chilling tweet came during the height of the Dallas shooting, which left five officers killed. 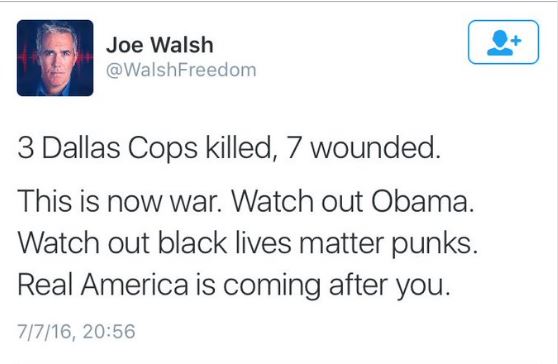 Joe Walsh needs to be arrested for threatening our President. STFU @walshfreedom

The next day (July 8), CNN anchor Don Lemon invited the former Illinois congressman on air to clarify the comments he made. When Lemon asked the 54-year-old why he deleted the tweet, Walsh said Twitter shut him down, but he was “pissed off.”

“A lot of Americans are pissed off and a lot of police officers around the country are upset because there really is a war on our cops, and a lot of police officers Don, just like I think a lot of Americans believe that it started with Barack Obama. You go all the way back to Ferguson, Mo., from that point forward the last couple years, Barack Obama has done nothing but hate on cops, accusing cops of being bad and racist and he did it again Don, a couple of days ago in Minnesota.”

Lemon, who remained composed during the interview interjected and asked Walsh specifically to site examples of when the president said what Walsh accused him of.

“His first and second and third statement after Ferguson said there is systemic racism, police departments in this country need to be reformed, I mean, think about that Don.”

“But that’s not accusing cops of being racist,” Lemon, who recently revealed he has to yes sir officers when pulled over to avoid being shot, said. “He’s actually pointing out a fact. There is systemic racism in this country and there are police departments that need to be reformed. What is racist about that?”

Sensing  Walsh may have a deep-rooted disdain for the president, Lemon–who admitted to being on the air for 20 hours–point blank asked him what’s his quarrel with Barack Obama.

“That is a broad statement and actually an insulting statement about the commander in chief,” Lemon, visibly over it, replied.

Check out the full clip below to hear Walsh defend his Tweet.

Final thought tonight for all of us: