A Maryland artist says her livelihood is in jeopardy after Facebook banned her page prohibiting her from contacting her followers for upcoming art shows. The offense? Turning Donald Trump‘s ‘MAGA’ hats into Ku Klux Klan hoods and Swastikas.

Kate Kretz says she rips apart the well-known red Make America Great Again hat and turns them into other divisive symbols. While speaking with WUSA 9, she said her art is meant to start a dialogue.

“The armband is actually titled, ‘Only the Terrorized Own the Right to Name Symbols of Terror,’ and so if people are afraid of people that are walking around with MAGA hats because they’re afraid of violence,” Kretz said. “It’s not really up to the wearer to say, ‘Oh, you shouldn’t feel afraid of me.’ “ 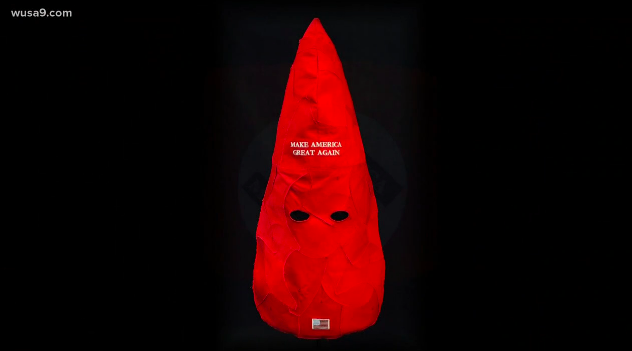 Kretz said she mostly received positive feedback, but about four or five days after an image of a reimagined Swastika band made from the red MAGA hat appeared, Facebook shut down her page citing it violated community standards. Kretz appealed the decision but says she hasn’t heard anything.

The Mount Rainier, Md. resident said she buys knock-off MAGA hats for her art. “I wanted to make sure I wasn’t putting any money in [Trump’s] pocket,” Kretz said.

And while she knows art is subjective, as one of the many artists that help to make Facebook, she thinks Facebook should exercise more diplomacy.

“I understand doing things for the greater good,” Kretz said. “However, I think artists are a big part of Facebook’s content providers, and they owe us a fair hearing.”